The Chimaera - or Chimera - was said to be made out of three different creatures: lion, goat and serpent. A savage beast, sprouting fire from its mouth, it devastated the land until it was killed by the hero Bellerophon, who flew over it riding his winged horse Pegasus.
The Chimera has been described as female, and that may be something related to her name that in ancient Greek means 'young she-goat'. Despite this rather humble name, she was of divine origin. Her father was the giant Typhon and her mother the half-serpent Echidna. She had as brothers Cerberus (the hound of Hell), Sphinx, Hydra (the nine-headed water snake), and Orthrus (another multi-headed dog). 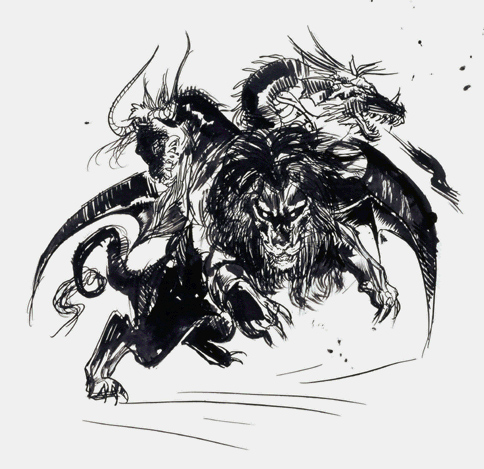 She was of divine race, not of men, in the fore part a lion, in the hinder a serpent, and in the middle a goat, breathing forth in terrible manner the force of blazing fire. And Bellerophon slew her, trusting the signs of the gods.

The Chimaera who breathed raging fire, a creature fearful, great, swift footed and strong, who had three heads, one of grim-eyed lion, another of a goat, and another of a serpent. In her forepart she was a lion; in her hinderpart a dragon; and in her middle part, a goat, breathing forth a fearful blast of blazing fire. Her did Pegasus and noble Bellerophon slay.

The dreaded Chimaera took up residence in a place called Lycia and caused great havoc, killing and terrorizing all the neighboring area. So naturally, King Iobates sought for some hero to destroy it. At that time there arrived at his court a gallant young warrior, whose name was Bellerophon. He brought letters from Proetus, the son-in-law of Iobates, recommending Bellerophon in the warmest terms as an unconquerable hero, but added at the close a request to his father-in-law to put him to death. The reason was that Proetus was jealous of him, suspecting that his wife Antea looked with too much admiration on the young warrior. From this instance of Bellerophon being unconsciously the bearer of his own death-warrant..
Iobates, on perusing the letters, was puzzled what to

do, not willing to violate the claims of hospitality, yet wishing to oblige his son-in-law. A lucky thought occurred to him, to send Bellerophon to combat with the Chimaera. Bellerophon accepted the proposal, but before proceeding to the combat consulted the soothsayer Polyidus, who advised him to procure if

possible the horse Pegasus for the conflict. For this purpose he directed him to pass the night in the temple of Minerva. He did so, and as he slept Minerva came to him and gave him a golden bridle. When he awoke the bridle remained in his hand. Minerva also showed him Pegasus drinking at the well of Pirene, and at sight of the bridle, the winged steed came willingly and suffered himself to be taken. Bellerophon mounting, rose with him into the air, and soon found the Chimaera.
Flying above the Chimaera on Pegasus, Bellerophon rained down arrows on the creature, with little effect - the breath of the Chimera was so hot that it melted the hero's arrowheads. The beast was too strong and threatened to overwhelm him with its flaming breath. Bellerophon then attached a lump of lead to the point of his spear and thrust it between the Chimaera's jaws. The creature's fiery breath melted the lead, which trickled down its throat, burning its insides -- instantly killing her.