The face on Mars

You're looking at a partial high-resolution image of the notorious Face on Mars, universally "debunked" by mainstream media outlets due in no small part to the baseless pronouncements of a 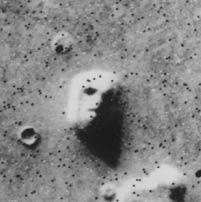 I suspect many readers will agree that the highlighted feature at least resembles a humanoid eye, down to the well-defined elliptical structure surrounding the central protruding "pupil." But how do we go about testing the notion that the Face on Mars boasts an anatomically accurate "eye"? After all, aren't we merely seeing what we want to see?

In this case, no.


Long before the Mars Global Surveyor spacecraft returned provocative images of the Cydonia Mensae region of Mars, the presence of secondary facial characteristics had been predicted by proponents of what became known as the Artificiality Hypothesis.

Your a real plonker, yeah it may look like a face but its a result of both wind and water erosion, its a fluke of the Mars enviromental evolution, there is NO seceret cover up. Get over it.