Researchers have discovered the fossilised remains of an ancient whale with huge, fearsome teeth. A Peruvian desert has turned out to be the final resting place of an ancient whale with teeth much bigger than those of the largest of today's sperm whales. The fossil, dated at 12–13 million years old, belongs to a new, but extinct, genus and species described in Nature today1. Named Leviathan melvillei, it probably hunted baleen whales. A team of researchers recovered 75% of the animal's skull, complete with large fragments of both jaws and several teeth. On the basis of its skull of 3 metres, they estimate that Leviathan was probably 13.5–17.5 metres long, within the range of extant male sperm whales (Physeter macrocephalus). Its largest teeth, however, are more than 36 centimetres long — nearly 10 centimetres longer than the largest recorded Physeter tooth.
Modern sperm whales lack functional teeth in their upper jaw and feed by suction, diving deep to hunt squid. Conversely, Leviathan had massive teeth in both its upper and lower jaws, and a skull that supported large jaw muscles. It may have hunted like raptorial killer whales, which use their teeth to tear off flesh. Co-author Klaas Post of the Rotterdam in the Netherlands stumbled across the fossil in November 2008 during the final day of a field trip to Cerro Colorado in the Pisco-Ica Desert on the southern coast of Peru — an area that is now above sea level owing to Andean tectonic activities. The fossils were prepared in Lima, where they will remain.

The name given to the creature combines the Hebrew word 'Livyatan', which refers to large mythological sea monsters, with the name of novelist Herman Melville, who

penned Moby-Dick — "one of my favourite sea books", says lead author Olivier Lambert of the National Museum of in Paris.
The authors think that Leviathan, like the extinct giant shark, preyed on medium-sized baleen whales, which were between 7 and 10 metres long, smaller than today's humpback whales and widely diverse at the time. The authors speculate that Leviathan became extinct as a result of changing environmental conditions. "Top predators are very sensitive to the changes in their prey," Lambert says. Changes in number, diversity or size of baleen whales, as well as the climate cooling that occurred at around Leviathan 's time, would have had dire impacts. The creature's surviving cousins — Physeter, pygmy and dwarf sperm whales — are specialized deep-diving squid hunters that occupy a different ecological niche from Leviathan. According to vertebrate palaeontologist Lawrence Barnes at the Natural History Museum of Los Angeles County, this discovery demonstrates that sperm whale-like cetaceans were much more diverse in the past and that the modern sperm whale and pygmy sperm whales are the "only surviving vestiges of a larger evolutionary radiation of related whales in the past". 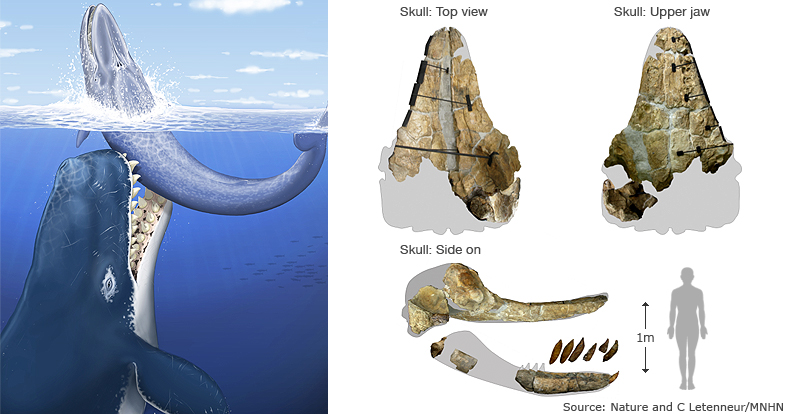 All sperm whales have characteristically large foreheads to hold their 'spermaceti organ', a series of and wax reservoirs buttressed with massive partitions of connective tissue. Scientists have long thought that this organ helps sperm whales to dive deeply to feed. The curved 'basin' atop Leviathan 's snout suggests that it also had a large spermaceti organ, even though it probably did not dive to feed. The authors speculate that, if Leviathan hunted baleen whales near the surface, the large spermaceti organ existed long before modern sperm whales became specialized for foraging squid at depth.
The organ could have served other functions, such as echolocation, acoustic displays or aggressive head-butting. "Spermaceti organs could be used as battering rams to injure opponents during contests over ," says evolutionary morphologist David Carrier of the University of Utah in Salt Lake City. According to Carrier, at least two nineteenth-century whaling ships were sunk when large punched holes in their sides with their foreheads, Carrier adds, and Leviathan may have used forehead ramming to dispatch its prey.


source
Posted by crkota at 3:19 PM No comments: