Ball lightning is described as a luminous sphere which seems to appear out of nowhere and vanish into thin air. It varies in size from two to ten inches in diameter. It usually is seen shortly before or after, or during, a thunderstorm. Its duration varies from a few seconds to a few minutes. "The lifetime of ball lightning tends to increase with size and decrease with brightness. Balls that appear distinctly orange and blue seem to last longer than average....Ball lightning usually moves parallel to the earth, but it takes vertical jumps. Sometimes it descends from the clouds, other times it suddenly materializes either indoors or outdoors or enters a room through a closed or open window, through thin nonmetallic walls or through the chimney." 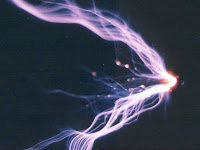 discharges. For example, Russian physicist Pyotr Kapitsa described ball lightning as an electrodeless discharge caused by a standing UHF waves of unknown origin present between the earth and a cloud.* According to another theory, "outdoor ball lightning is caused by an atmospheric maser-- analogous to a laser, but operating at a much lower energy--having a volume of the order of many cubic kilometers."

According to their theory, when lightning strikes the ground, the minerals are broken down into tiny particles of silicon and its compounds with oxygen and carbon. The tiny charged particles link up into chains, which go on to form filamentary networks. These cluster together in a light fluffy ball, which is borne aloft by air currents. There, it hovers as ball lightning, or a burning orb of fluffy silicon emitting the energy absorbed from the lightning in form of heat and light, until the phenomenon burns itself out.

Ball lightning has been observed since ancient times and by thousands of people in many different places. Most physicists seem to believe that there is little doubt that it is a real phenomenon. But there is still disagreement as to what it is and what causes it.
Posted by crkota at 12:11 PM No comments:

Ball lightning is an atmospheric phenomenon, the physical nature of which is still controversial. The term refers to reports of luminous, usually spherical objects which vary from pea-sized to several meters in diameter. It is sometimes associated with thunderstorms, but unlike lightning flashes, which last only a small fraction of a second, ball lightning reportedly lasts many seconds. Laboratory experiments have produced effects that are visually similar to reports of ball lightning, but it is presently unknown whether these are actually related to the naturally occurring version. 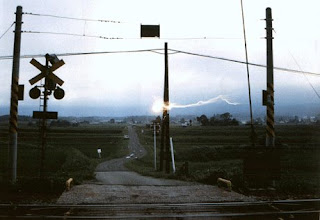 Scientific data on natural ball lightning is scarce due to its infrequency and unpredictability. The presumption of its existence is based on reported sightings from the public, and have therefore produced somewhat inconsistent findings. Due to inconsistencies and the lack of any reliable data, the true nature of ball lightning is still unknown. Until recently, ball lightning was often regarded as a fantasy or a hoax. Reports of the phenomenon were dismissed due to lack of physical evidence, and were often regarded the same way as UFO sightings. Recently however,

the overwhelming number of sightings has caused a renewed interest in studying the possible existence and nature of the phenomenon.

Natural ball lightning appears infrequently and unpredictably, and is therefore rarely photographed. However there do exist several photos and even videos of what people claim to be ball lightning.
Posted by crkota at 12:11 PM No comments:

Atlantis is one of the world's greatest mysteries. To many, its very name evokes a mystical sense of familiarity and lost memories. It is said to be the lost Atlantic continent, the first home of civilisation, an earthly paradise, struck down by a natural catastrophe at the height of its power, and now lying deep under the ocean, with only the tops of its mountains protruding from the ocean floor.


To others, Atlantis is merely a legend, invented by Plato, the Greek philosopher, as a backdrop for two of his dialogues: Timaeus and Critias.

Another belief is that Atlantis was a true precursor of the early civilisations and not located in the Atlantic at all, but instead occupying some other location, like the Greek islands of Crete or Santorini, as opposed to the Azores, Madeira, or the Canary Islands. 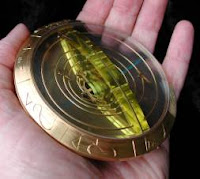 I first became aware of Atlantis whilst attending a workshop on Spiritual Healing given by Michael Bradford. He came over to me, during a break, and told me that I had been in Atlantis, working with crystals, in a past life. Since then I have been researching Atlantis and have spoken to many people who are also curious and have had similar experiences.

The name Atlantis derives from atlas, the giant Greek God who is said to have supported the sky. In Greek, Atlantis means "Daughter of Atlas".

According to Plato, Atlantis was a garden of Eden with an abundance of precious minerals and crystals, particularly orichalcium which was red in colour and considered more valuable than gold. This earthly paradise was a combination of mighty mountains, fertile plains, rivers, marshes and lakes with a thriving population and many species of animals, including elephants.Wood was plentiful for the carpenters. Herbs, flowers, and fruit grew and thrived, being used both as food and for medicinal purposes. The Atlanteans constructed temples, palaces, harbours and docks. They utilized 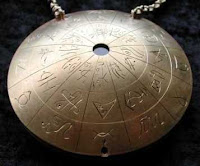 the natural white, black and red stone that were quarried from underneath the centre of the island. Some of their buildings were simple, while others were very elaborate, coated and decorated with gold, brass, tin and the red orichalcium. They built a temple covered with gold and silver pinnacles dedicated to Poseidon, the God of sea, earthquakes and horses. Its ceiling was made of ivory whilst the walls and pillars were lined with orichalcium. There were many statues of gold including the main statue, from floor to ceiling, of Poseidon himself standing in a chariot with six winged horses.

Fountains of hot and cold springs were to be found amidst suitable trees and decorations and relaxing spas. These were used separately by the kings, public and even the horses and cattle! There were many lovely gardens and places of exercise including a horse racing course.

The large and busy harbour bustled with vessels and merchants from all parts of the world.

The surrounding mountains of great height and beauty were inhabited by the wealthy villagers. The meadows, rivers and lakes provided enough food for everyone. It really was the land of plenty!

The large rectangular plain played an important part in this civilization. Straight canals, a hundred feet in width, were cut into it to transport wood and the fruits of the earth down into the city from the mountains. 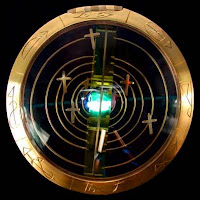 particular area. For many generations, the people obeyed the laws and possessed true and great spirits, practicing gentleness and wisdom. They lived a very divine life, enjoying their gold and possessions but not abusing them. They believed in friendship and led an almost "idyllic" existence in this land of "milk and honey". Legend says there were many crystal healers, masseurs and therapists, working for the well-being of their fellowman.

A Hopi myth describes Atlantis as a land in which great cities were created and crafts flourished, but when the people became corrupt and warlike, a great flood destroyed their world. It is thought that eventually the Atlanteans did change their peaceful ways and became aggressive with each other. That is when disaster struck!
Posted by crkota at 10:41 AM 8 comments:

Where Atlantis could be? 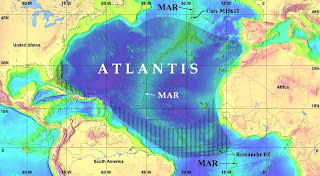 There are many different beliefs as to the actual location of Atlantis. A large percentage believe, as did Plato, that it is a sunken island under the Atlantic Ocean. Others believe it is located near the Greek islands of Crete or Thera (Santorini). A severe earthquake on 9th July 1956 disturbed the lower strata in a quarry on Thera and the ruins of what appeared to be an ancient civilization were found. Human bones, teeth and charred wood, together with pottery and other artistic relics were Carbon-14 dated by Professor Galanopoulous. The results pointed to this being the remains of Atlantis.

The Azores, Madeira and the Canary Islands, along with smaller Atlantic islands, have also been suggested. The Azores, in common with Thera (perhaps even more so), have the look of sunken islands about them, with great black mountain peaks that rise directly from the ocean. 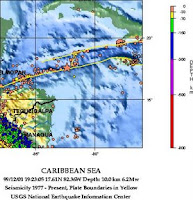 The Caribbean has also been suggested. In the 1920's, an American psychic Edgar Cayce predicted that Atlantis would rise again in 1968 from the ocean floor near Bimini in the Bahamas. In fact, in 1968 an airline pilot sighted an emergent temple of great antiquity only a few miles away from the predicted site. Since then there have been many more sightings and scuba divers have discovered flights of steps cut into the steep sides of the continental shelf in the same area. Great circular interrupted patterns of monolithic stones have been photographed on the ocean bottom, suggesting a sort of American "Stonehenge". Underwater pyramids, vertical walls and even a great arch have also been observed by scuba divers. Dr. Manson Valentine first discovered and explored the "Bimini Road" a sunken wall, foundation or dock, lying at a depth of about six fathoms, east of North Bimini. 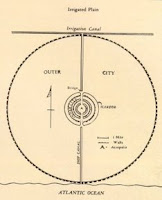 It is very interesting that these ruins lie within the area known as "The Bermuda Triangle", the area between Bermuda, Eastern Florida and east of Puerto Rico. This is where many aircraft, large ships and small boats have been known to disappear without trace. Reported aspects of their disappearances involve spinning compasses, instrument malfunction, radio and radar blackout and electronic drain.

One suggested explanation is that the Atlanteans possessed laser power through gigantic crystals, as was reported by Edgar Cayce through his psychic readings, several decades before lasers became an accepted part of modern technology.

However more recently South America has become the most favoured location. In Peru, enormous stone walls on mountain-tops were a mystery to the conquering Incas and Spaniards. An incredible old city, Tiahuanaco in Bolivia, was apparently built so long ago that prehistoric animals were depicted on the local pottery. Enormous buildings, built at an elevation of 13,500 feet, with walls ten feet thick and foundation stones of 200 tons, were constructed with such exactness and knowledge of physics and astronomy that many investigators are convinced that the builders could not have been of this earth.

Geological discoveries around Tiahuanaco include salt lines in the mountains, former cornfields under the frozen snow-line of the surrounding peaks, and sea shells along the shores of lake Titicaca which indicated that the city was possibly an ocean port, forced up to its present altitude some 15,000 years ago, during volcanic activity which accompanied the melting of glaciers.

In 1965, Dr. Robert Menzies took photos from the research ship, "Anton Bruun", off the coast of Peru. Sonar recordings taken in this area indicated unusual shapes along the floor of the ocean, which otherwise seem to be a mud bottom. Photos taken at a depth of 6,000 feet show what were apparently massive upright pillars and walls, some of which seemed to have writing on them. The camera also took pictures of rocks laying scattered on their side, some in heaps as if they had toppled over, perhaps at the time that this mysterious city fell more than a mile under the sea.

With the advancement of technology, which at present is probing into outer galaxies, the time may come when they are able to turn their attention below the surface of the ocean, and discover the truth about Atlantis.

Perhaps you have your own theories on the whereabouts of Atlantis that you may like to share and discuss.

I look forward to hearing from you.
Posted by crkota at 10:39 AM 1 comment: