Flightless giant island-living bird was the New Zealand giant moa (Dinornis giganteus), a member of the ratite family. There were several species of moa, some taller than the elephant bird at 7 ft (2 metres) to the middle of the back and 13 ft (4 metres) to the head (twice the height of a tall man), although their necks probably projected forwards like a kiwi rather than upwards as usually depicted. They were more lightly built than the elephant bird, but still three times the weight of a large man at up to 200 - 275 kg. The Giant Moa's eggs measured 10 inches (24 cm) long and 7 inches (18 cm wide). Females were 1.5 times the size and almost 3 times the weight of males, leading scientists the revise moa classification and the number of moa species. In the past, the males and females had been erroneously considered different species due to this size difference. The moas occupied similar niches to mammalian herbivores elsewhere.
New Zealand was even more isolated than Madagascar and had no land mammals except bats. The first Polynesians arrived in New Zealand around the 10th century, becoming the Maori. The dominant life-forms were the giant land birds that lived in the fringes of the semi-tropical forests and on the grasslands and which the Maoris called 'Moas'. Encountering the huge birds, the

Maoris made legends of the giant moa, calling it the Poua-Kai and describing it as a huge bird of terrific size and strength which, in a great battle, destroyed half the warriors of a powerful tribe with its terrible rending talons and thrusting bea.
Moas were huge ratite 'running birds' like the Elephant Bird, but they inhabited the grasslands and forest-fringe in extraordinary numbers and variety. Scientists later gave them the family name Dinornithidae, 'terrible birds'. The aggressive Polynesian invaders became a Moa-hunting culture and for the moa, which had had no predators in 100 million years, the effect was devastating.
By the time Europeans discovered the islands in 1770, the giant moas had been hunted to extinction; their official extinction date is given as 1773. Europeans did not learn of the moa's existence until bones were discovered in the 1830s. The exact number of species is open to debate, the current belief is that there were 11 species contemporary with man and that higher counts were due to the sexual dimorphism. With only one natural predator large enough to tackle them (Haast's Eagle, another extinct giant) they were the dominant terrestrial species on the islands. Although the giant moa is the species that has captured the modern imagination, other members of the moa family were turkey-sized and weighed little over 1 kg. One striking feature of moa anatomy, apart from its height, is the complete lack of humeri (upper arm-bones). This means they had no trace of wings, not even a vestigial wing-structure.
There were several families of moa. Pachyornis and Emeus were hunted to extinction by the Maoris between 1100 and 1500. The powerfully built medium-sized Euryapteryx may have survived until 1700. Pygmy Moas, 3 -4 ft tall (90 - 120 cm) of the genera Anomalopteryx and Megalapteryx died out by 1800, hunted by both Maori and Europeans though there is evidence that one of the pygmy moas may have survived into the 20th century and may possibly still exist in the wilderness of Fiordland. By the time Europeans had realised the significance of the discovery of giant moas, the birds were almost extinct.
In 1838, Englishman John Rule brought back a fragment of a huge leg-bone from New Zealand. It was investigated by palaeontologist Richard Owen in London, but even then many dismissed it as a hoax or myth. It took several more years and many more bones to convince naturalists that the moa existed. A consignment of moa bones was sent in 1843 by geologist and missionary, Revd William Williams. He had studied the birds, and had recorded a sighting by two English whalers near Cloudy Bay, in Cook Straits in 1842: "the natives there had mentioned to an Englishman of a whaling party that there was a bird of extraordinary size to be seen only at night on the side of a hill near there; and that he, with the native and a second Englishman, went to the spot; that after waiting some time they saw the creature at some little distance, which they describe as being fourteen or sixteen feet high. One of the men proposed to go nearer and shoot, but his companion was so exceedingly terrified, or perhaps both of them, that they were satisfied with looking at him, when in a little time he took alarm and strode up the mountain."

In the 1850s, New Zealand resident, John White, interviewed several sealers who claimed to have eaten moas on the South Island, indicating that some birds had survived until as late as 1850. The most detailed account of giant moas came from an old Maori on South Island, who described the birds' appearance, habitat, feeding and nesting habits. He Maori described how fierce, booming male moas, guarded nesting females. He also described how the birds were hunted and eaten. Another Maori moa hunter described how the moa defended itself by kicking. Their eggs were taken as food and as curios by Europeans. In 1865, a moa egg containing an embryo was discovered near Cromwell.
Entry for Moa in Harmsworth Natural History (1910): The fate impending in the case of the kiwis has long since overtaken their gigantic extinct cousins the moas (family Dinornithidae), which had already disappeared from New Zealand when those islands were first colonised from Europe, although there is good reason to believe that they lived on till within the last five hundred or four hundred years, if not to a considerably later date. These birds, of which not only the bones, but in some cases the dried skin, feathers, and egg-shells, as well as the pebbles they were in the habit of swallowing, have been preserved in the superficial deposits of New Zealand, attained a wonderful development in those islands, where they were secure from persecution till man appeared on the scene. 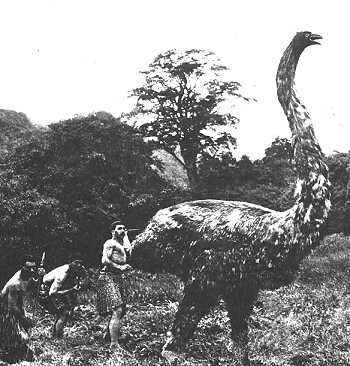 Not only did the larger members of the group far exceed the ostrich in size, but they were extraordinarily numerous in species, as they were also in individuals; such a marvellous exuberance of gigantic bird-life being unknown elsewhere on the face of the globe in such a small area. As regards size, the largest moas could have been but little short of 12 feet in height, the tibia being considerably over a yard in length; while the smallest were not larger than a turkey. In reference to their numbers, it may be mentioned that there are some twenty species, arranged in about six genera; and the surface of many parts of the country, as well as bogs and swamps, literally swarmed with their bones.
Some of the moas had four toes to the foot, and others three, but all differed from kiwis in having a bony ridge over the groove for the extensor tendons of the tibia. They are, therefore, evidently the least specialised members of the order yet mentioned, seeing that this bridge is present in the majority of flying birds, and has evidently been lost in all the existing Ratitae. While agreeing in some parts of their organisation with kiwis, moas are distinguished by the short beak and the presence of after-shafts to the feathers while in the larger forms, at any rate, not only was the wing, but likewise the whole shoulder-girdle, wanting. There is, however, reason to believe that certain pigmy moas - which from their size were evidently the most generalised members of the group - retained some of the bones connected with the wing.

Moas were represented by several very distinct structural modifications; the largest being the long-legged, or true, moas (Dinornis) , characterised by the long and comparatively slender leg-bones, and also the large and depressed skulls. In marked contrast to these were the short-legged, or elephant-footed, moas (Pachyornis), in which the limb-bones are remarkable for their short and massive form; the metatarsus being most especially noteworthy in this respect. In these birds the skull is vaulted and the beak narrow and sharp; but in the somewhat smaller and less stoutly-limbed-broad-billed moas (Emeus) it is broad, blunt, and rounded. The other species, in all of which the beak was sharp and narrow, are of relatively small stature, and include the smallest representatives of the family, some of which were less than a yard in height. The eggs of the moas were of a pale green colour, and probably formed a favourite food of the Maori, by whom these birds wcre evidently exterminated.
Several skeletons are on display in museums in New Zealand and Europe and there are models and reconstructions based on these skeletons, on naturally preserved feathers and on oral tales of the bird and on its smaller relative, the kiwi. It is believed that moas resembled kiwis in several ways, that they were communal living and that the eggs were brooded by the males. With no need to look out for predators, their heads were probably carried forwards, like the kiwi, rather than upwards like an ostrich.