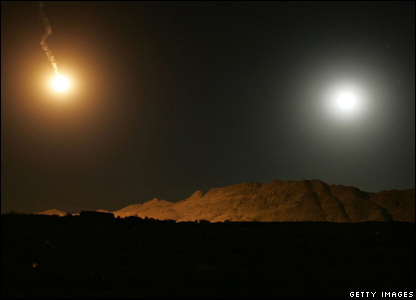 Mars' ultraviolet auroral lights have been mapped for the first time. The map could in turn shed light on the way the red planet interacts with electrically charged particles spit out by the sun. The aurorae on Mars were discovered in 2004 with the SPICAM ultraviolent and infrared atmospheric spectrometer on the Mars

Express orbiter, which is still circling the planet. The phenomenon is not visible in regular light, so there are no photos. Using the SPICAM and other instruments aboard Mars Express, a group of scientists have observed nine new auroral emission events, which allowed them to make a crude map of planet's auroral activity. On Earth, aurorae are more commonly known as the northern and southern lights. They are confined to the polar regions of the planet and shine brightly in the visible as well as the ultraviolet wavelengths. They produce spectacular shows now and then for anyone living near the Arctic Circle.

Similar aurorae are known to exist on Jupiter and Saturn. They occur wherever a planet's magnetic field channels electrically charged particles into the atmosphere. Mars lacks the large-scale internal mechanism to generate a planetary magnetic field. Instead, Mars has small pockets of magnetism where areas of rocks in the crust are themselves magnetic -- essentially, Mars has many magnetic pole-type regions all over its surface. Mars Express' observations suggest that like the aurorae of other planets, Mars' aurorae are caused by charged particles, likely electrons, colliding with molecules in the atmosphere.

(These electrons almost certainly come from the sun, which constantly blows them out into space, a phenomenon known as the solar wind.) The spacecraft's instruments showed that the aurorae seem to be located near regions where the Martian magnetic field is strongest. The findings were detailed recently in the Journal of Geophysical Research.