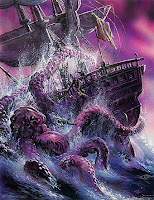 Kraken ( kra’ ken, IPA: /ˈkrɑːkɛn/) are legendary sea monsters of gargantuan size, said to have dwelt off the coasts of Norway and Iceland. The sheer size and fearsome appearance attributed to the beasts have made them common ocean-dwelling monsters in various fictional works (see Kraken in popular culture). The legend may actually have originated from sightings of real giant squid that are estimated to grow to 13 metres (46 feet) in length, including the tentacles. These creatures normally live at great depths, but have been sighted at the surface and reportedly have "attacked" small ships.
Kraken is the definite article form of krake, a Scandinavian word designating an unhealthy animal, or something twisted.[1] In modern German, Krake (plural and declined singular: Kraken) means octopus, but can also refer to the legendary Kraken (Terrell, 1999).
Although the name kraken never appears in the Norse sagas, there are similar sea monsters, the hafgufa and lyngbakr, both described in Örvar-Odds saga and the Norwegian text from c. 1250, Konungs skuggsjá.[2] Carolus Linnaeus included kraken as cephalopods with the scientific name Microcosmus in the first edition of his Systema Naturae (1735), a taxonomic classification of living organisms, but excluded the animal in later editions. Kraken were also extensively described by Erik Pontoppidan, bishop of Bergen, in his "Natural History of Norway" (Copenhagen, 1752–3).
Early accounts, including Pontoppidan's, describe the kraken as an animal "the size of a floating island" whose real danger for sailors was not the creature itself, but the whirlpool it created after quickly descending back into the ocean. However, Pontoppidan also described the destructive potential of the giant beast: "It is said that if it grabbed the largest warship, it could manage to pull it down to the bottom of the ocean" (Sjögren, 1980). Kraken were always distinct from sea serpents, also common in Scandinavian lore (Jörmungandr for instance). A representative early description is given by the Swede Jacob Wallenberg in his book Min son på galejan ("My son on the galley") from 1781:

… Kraken, also called the Crab-fish, which [according to the pilots of Norway] is not that huge, for heads and tails counted, he is no larger than our Öland is wide [i.e. less than 16 km] ... He stays at the sea floor, constantly surrounded by innumerable small fishes, who serve as his food and are fed by him in return: for his meal, if I remember correctly what E. Pontoppidan writes, lasts no longer than three months, and another three are then needed to digest it. His excrements nurture in the following an army of lesser fish, and for this reason, fishermen plumb after his resting place ... Gradually, Kraken ascends to the surface, and when he is at ten to twelve fathoms, the boats had better move out of his vicinity, as he will shortly thereafter burst up, like a floating island, spurting water from his dreadful nostrils and making ring waves around him, which can reach many miles. Could one doubt that this is the Leviathan of Job?

According to Pontoppidan, Norwegian fishermen often took the risk of trying to fish over kraken, since the catch was so good. If a fisherman had an unusually good catch, they used to say to each other, "You must have fished on Kraken." Pontoppidan also claimed that the monster was sometimes mistaken for an island, and that some maps that included islands that were only sometimes visible were actually indicating kraken. Pontoppidan also proposed that a young specimen of the monster once died and was washed ashore at Alstahaug (Bengt Sjögren, 1980).
Since the late 18th century, kraken have been depicted in a number of ways, primarily as large octopus-like creatures, and it has often been alleged that Pontoppidan's kraken might have been based on sailors' observations of the giant squid. In the earliest descriptions, however, the creatures were more crab- like than octopus-like, and generally possessed traits that are associated with large whales rather than with giant squid. Some traits of kraken resemble undersea volcanic activity occurring in the Iceland region, including bubbles of water; sudden, dangerous currents; and appearance of new islets.
In 1802, the French malacologist Pierre Dénys de Montfort recognized the existence of two kinds of giant octopus in Histoire Naturelle Générale et Particulière des Mollusques, an encyclopedic description of mollusks. Montfort claimed that the first type, the kraken octopus, had been described by Norwegian sailors and American whalers, as well as ancient writers such as Pliny the Elder. The much larger second type, the colossal octopus (depicted in the above image), was reported to have attacked a sailing vessel from Saint-Malo, off the coast of Angola. 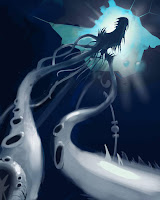 Montfort later dared more sensational claims. He proposed that ten British warships that had mysteriously disappeared one night in 1782 must have been attacked and sunk by giant octopuses. Unfortunately for Montfort, the British knew what had happened to the ships, resulting in a disgraceful revelation for Montfort. Pierre Dénys de Montfort's career never recovered and he died starving and poor in Paris around 1820 (Sjögren, 1980). In defence of Pierre Dénys de Montfort, it should be noted that many of his sources for the "kraken octopus" probably described the very real giant squid, proven to exist in 1857.
In 1830, possibly aware of Pierre Dénys de Montfort's work, Alfred Tennyson published his popular poem "The Kraken" (essentially an irregular sonnet), which disseminated Kraken in English forever fixed with its superfluous the. The poem in its last three lines, also bears similarities to the legend of Leviathan, a sea monster, who shall rise to the surface at the end of days.
Tennyson's description apparently influenced Jules Verne's imagined lair of the famous giant squid in Twenty Thousand Leagues Under the Sea from 1870. Verne also makes numerous references to Kraken, and Bishop Pontoppidan in the novel.

Later developments of the Kraken image may be traced at Kraken in popular culture.

From ancient times, sailors have reported seeing a huge sea monster with many tentacles, called the kraken. Sailors knew about the octupus and squid, real ocean animals that had tentacles. However, the kraken was considered to be a different species because it was much, much bigger. Sometimes it was thought to be a giant octopus, sometimes it was thought to be a giant squid. Much of the time, it was simply a big sea monster called the kraken.
During the early part of the scientific era, the kraken was considered just as likely to exist as sea serpents. In other words, it was laughed at. Serious scientists steered clear of the kraken question, refusing to study it even when presented with beached kraken carcasses. Then there came a time when everything changed. Several kraken carcasses were beached within a short time of each other, and there was such an uproar that the reluctant scientists were forced to pay attention.
The kraken was declared a real species. It was named the giant squid. The giant squid remains one of the most elusive large animals in the world. For many years, scientists tried to observe the giant squid in its habitat, but failed. Many people claimed to have seen giant squids, but they were mostly fishermen and sailors, the same people who are not believed when they report sea serpents. Every live sighting was unconfirmed and in each case the witness was not a scientist. Scientists spent millions of dollars on expeditions, but could not obtain video footage of a live squid. Everything that was known about giant squids was based on dead bodies. All expeditions into deep water in search of the natural habitat of giant squids had proved fruitless. The giant squid still had much in common with mythical creatures and true cryptids, even though the scientific community no longer had any doubt that giant squids exist.
In September of 2004, that finally changed. Japanese scientists attracted a giant squid with a baited line, and automatic cameras took more than 500 photographs of the giant squid before it ripped itself free, leaving an 18-foot length of tentacle still attached to the bait. 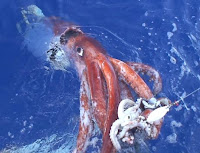 There is still doubt about just how big giant squids get. Both eyewitness sightings and sucker scars on sperm whales seem to indicate that there are squids much bigger than any dead body we currently have. Most scientists refuse to believe that squids that huge could exist. Is there more than one species of giant squid out there, with one of them being really, really huge? Are the giant squids that have been netted near the surface or that have washed up on beaches the smaller ones?
Skepticism towards the idea of truly huge squids has weakened recently. Now, scientists think that the Antarctic species of squid called Mesonychoteuthis hamiltoni actually grows much bigger than the giant squid. They don't have proof of this yet, as the only complete specimens of Mesonychoteuthis hamiltoni have been juveniles, but the size of these babies suggests that really big adults are out there. In recognition of this, Mesonychoteuthis hamiltoni has recently been given the common name of "colossal squid."

we have a collosal squid in New Zealand's Te Papa museum, the difference being they have hooks instead of suckers... http://squid.tepapa.govt.nz/anatomy