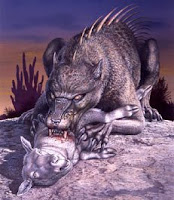 The chupacabra is one of those cryptids that proves very frustrating to investigators. One of the biggest frustrations hinges on the creature's appearance. There are only a few features that stay relatively consistent from one sighting to the next; everything else seems to vary enormously. These relatively constant features include large eyes that are usually red or orange and about the same size and shape as an egg, a mouth full of big fangs, sharp claws on the hands and feet, a bunch of spikes or spike-like fins running in a row down the spine, a bipedal stance, three-toed hind feet that might also be webbed, and a hind portion shaped like a kangaroo with oversized legs for jumping. The top portion of the body looks stunted and scrawny in comparison with its massive hindquarters. 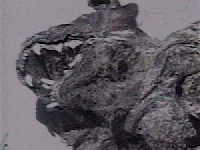 The variable features include what kind of skin the chupacabra has. It may be hairy all over, hairy on some parts, or hairless. When it lacks hair on one or more parts, the hairless skin may be scaled like a fish or reptile, it may be smooth and resemble a frog's skin, or it may be bumpy like a toad. Some witnesses report that the chupacabra has chameleon-like abilities or a power resembling shapeshifting that only affects its skin. These witnesses report seeing the chupacabra change the color and texture of its skin dramatically, even turning its body hair green to blend in with foliage. The chupacabra may also have feathers on one or more parts of its body, especially red feathers. It sometimes has wings. Even when the chupacabra cannot fly, it can often jump so 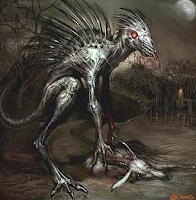 high that it is almost as good as flying. Reports of it jumping over buildings are not uncommon.
The other main frustration centers on the sheer number of creatures that have been given the label of "chupacabra." The chupacabra sightings that came from Puerto Rico in approximately the years 1995-1999 fueled a worldwide interest that caused reports of "chupacabras" to flow in from every location imaginable. Some of these non-Puerto-Rican creatures resembled anomalous kangaroos, others resembled hairy humanoids of various sorts, including winged apes, and a few did sound like the original Puerto Rican chupacabras.

The chupacabra's behavior also provokes much frustration among cryptozoologists. Its name means "goatsucker" and that it what it allegedly did: it attacked livestock and sucked their blood like a vampire. This habit caused chupacabra reports to get mixed up with another mysterious phenomena that is generally called cattle mutilation, but that can refer to the unexplained violent deaths of any livestock or pets. Cattle mutilation has a bad name because it has been linked to so many weird crackpot theories, it is thought of as successfully debunked by about half of all people who take other weird phenomena seriously, and it has accumulated a great deal of bad evidence among which any good evidence can easily be lost. Many so-called cattle mutilation deaths have been shown to be due to rather mundane causes such as diseases, and cattle mutilation reports have often caused massive hysterias during which many ordinary deaths were wrongly ascribed to this cause. You can see why cryptozoologists find it a headache to have the chupacabras held responsible for all sorts of goat and chicken deaths that may or may not be related to the real chupacabras, if such exist. 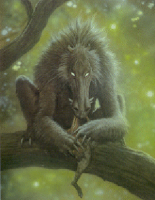 A further headache is the chupacabra fad itself, which obscures any important evidence and sensationalizes this cryptid so much that serious investigators become afraid to have their name associated with it. The chupacabra is often held up as a prime example of a fad monster with no historical precedent. People like to say that it popped suddenly into existence in 1995 and died out a few years later. In reality, researchers have found that the sightings, though less numerous, occurred as early as 1974, and that the Taino Indians had folklore about a similar being, the maboya.
As to what sort of animal the chupacabra might be, the question is hard to answer because this cryptid is so weird. Many investigators simply ignore chupacabaras. Some researchers have said it is a really unusual variety of mermaid, some compare it to a gargoyle and others declare that it is an animal from some other planet that escaped from an alien spaceship. In support of this last idea, the chupacabra's head is often compared to the alien "grays" from modern sightings, with the exception of its big fangs, red eyes and non-gray skin color, of course.
The chupacabra is a very popular monster, but it has not caught on in the realm of fiction. There are only a few chupacabra novels, mostly aimed at children. There are three chupacabra movies, all of them big flops. The titles of these films are Chupacabra Terror (which was originally named Chupacabras: Dark Seas), Bloodthirst: Legend of the Chupacabras and Legend of the Chupacabra.