Hunters in Namibia have caught strange creature that has never been seen before. Recording of events caused strong reactions - is a being from another planet, the mythical creature or something completely different?

Video showing the unusual creature caught in Africa has become a hit on the Internet in just a few days. In his description states that local hunters in Namibia saw a strange creature in search of food. One of the hunters had shot him, after which the creature fled into the bush, but hunters nevertheless find it. 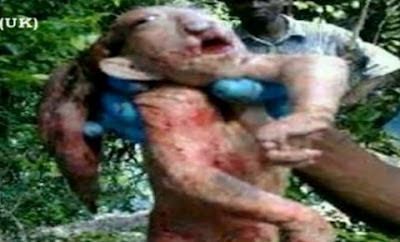 Hunters have found three other similar beings. One of them attacked them, so they killed him, but the other escaped.
The body of of the weird being were taken away in a hunting camp and is expected to detailed investigation. People on YouTube have made ​​a discussion on the origin of this creature. While some believe that it is a fake photographs, others are convinced of their authenticity, and some even claim to have themselves seen similar being.
Watch the video and judge for yourself whether he is a being from another planet, the mythical creature or something else.

There's a legend in Africa of just such a creature called the Tokelosh
you might be onto something here...

Thank u so much for having such a nice and entertaing stuff for us. I really enjoy your blog and the way you have describe your content.I also have some amazing and wonderful stuff and i wana to share it with you.
World Records List

thas is called "Orokotok" in bicol.. i dont know in filipino language.. :D

I really Enjoy your story on the manbat. (=D