Hobbits from Indonesian island of Flores

Six years after their discovery, the extinct little people nicknamed hobbits who once occupied the Indonesian island of Flores remain mystifying anomalies in human evolution, out of place in time and geography, their ancestry unknown. Recent research has only widened their challenge to conventional thinking about the origins, transformations and migrations of the early human family. 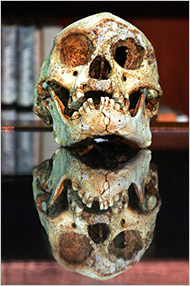 Indeed, the more scientists study the specimens and their implications, the more they are drawn to heretical speculation.

¶Were these primitive survivors of even earlier hominid migrations out of Africa, before Homo erectus migrated about 1.8 million years ago? Could some of the earliest African toolmakers, around 2.5 million years ago, have made their way across Asia?

¶Did some of these migrants evolve into new species in Asia, which moved back to Africa? Two-way traffic is not unheard of in other mammals.

¶Or could the hobbits be an example of reverse evolution? That would seem even more bizarre; there are no known cases in primate evolution of a wholesale reversion to some ancestor in its lineage.

Everything about them seems incredible. They were very small, not much more than three feet tall, yet do not resemble any modern pygmies. They walked upright on short legs, but might have had a peculiar gait obviating long-distance running. The single skull that has been found is no bigger than a grapefruit, suggesting a brain less than one-third the size of a human’s, yet they made stone tools similar to those produced by other hominids with larger brains. They appeared to live isolated on an island as recently as 17,000 years ago, well after humans had made it to Australia.

Although the immediate ancestor of modern humans, Homo erectus, lived in Asia and the islands for hundreds of thousands of years, the hobbits were not simply scaled-down erectus. In fact, erectus and Homo sapiens appear to be more closely related to each other than either is to the hobbit, scientists have determined.

It is no wonder, then, that the announcement describing the skull and the several skeletons as remains of a previously unknown hominid species, Homo floresiensis, prompted heated debate. Critics contended that these were merely modern human dwarfs afflicted with genetic or pathological disorders.

Scientists who reviewed hobbit research at a symposium here last week said that a consensus had emerged among experts in support of the initial interpretation that H. floresiensis is a distinct hominid species much more primitive than H. sapiens. On display for the first time at the meeting was a cast of the skull and bones of a H. floresiensis, probably an adult female.

Several researchers showed images of hobbit brain casts in comparison with those of deformed human brains. They said this refuted what they called the “sick hobbit hypothesis.” They also reported telling shoulder and wrist differences between humans and the island inhabitants.

Even so, skeptics have not capitulated. They note that most of the participants at the symposium had worked closely with the Australian and Indonesian scientists who made the discovery in 2003 and complain that their objections have been largely ignored by the news media and organizations financing research on the hobbits.

Some prominent paleoanthropologists are reserving judgment, among them Richard Leakey, the noted hominid fossil hunter who is chairman of the Turkana Basin Institute at Stony Brook University. Like other undecided scientists, he cited the need to find more skeletons at other sites, especially a few more skulls.

Mr. Leakey conceded, however, that the recent research “greatly strengthened the possibility” that the Flores specimens represented a new species.

At the symposium, Michael J. Morwood, an archaeologist at the University of Wollongong in Australia who was one of the discoverers, said that further investigations of stone tools had determined that hominids arrived at Flores as early as 880,000 years ago and “it is reasonable to assume that those were ancestors of the hobbits.” But none of their bones have been uncovered, so they remain unidentified, and no modern human remains have been found there earlier than 11,000 years ago.

Excavations are continuing at Liang Bua, a wide-mouth cave in a hillside where the hobbit bones were found in deep sediments, but no more skulls or skeletons have turned up. Dr. Morwood said the search would be extended to other Flores sites and nearby islands.

Peter Brown, a paleontologist at the University of New England in Australia, said that his examination of the premolars and lower jaws of the specimens made it almost immediately “very, very clear that this was a hominid in the wrong place at the wrong time.” The first premolars in particular, he said, were larger than a human’s and had a crown and roots unlike those of H. sapiens or H. erectus.

Dr. Brown, a co-author of the original discovery report, said that no known disease or abnormality in humans could have “replicated this condition.”

At first, Dr. Brown and colleagues hypothesized that the hobbits were descendants of H. erectus that populated the region and had evolved their small stature because they lived in isolation on an island. Island dwarfing is a recognized phenomenon in which larger species diminish in size over time in response to limited resources.

The scientists soon backed off from that hypothesis. For one thing, dwarfing reduces stature, but not brain size. Moreover, researchers said, the hobbit bore little resemblance to an erectus. In an analysis of the hobbit’s wrist bones, Matthew W. Tocheri of the Smithsonian Institution found that certain bones were wedge-shaped, similar to those in apes, and not squared-off, as in humans and Neanderthals. This suggested that its species diverged from the human lineage at least one million to two million years ago.

So if several lines of evidence now encourage agreement that H. floresiensis was a distinct and primitive hominid, the hobbit riddle can be compressed into a single question of far-reaching importance: where did these little people come from?

“Once you establish that this is a unique species,” said Frederick E. Grine, a paleoanthropologist at Stony Brook, “then these primitive features that it has suddenly take on a profound evolutionary significance.”

Scientists said in reports and interviews that they had only recently begun contemplating possible ancestries.

As a starting point, scientists rule out island dwarfing as a primary explanation. Dwarfs and pygmies are simply diminutive humans; they do not become more apelike, as the hobbits appear to be in some aspects. Besides, normal dwarfing would suggest that the hobbits presumably evolved from H. erectus, the only previous hominids identified in this part of Asia or anywhere outside Africa; the first one was discovered in Java in the late 19th century. But research has found few similarities between the hobbit skeleton and Asian H. erectus.

If the hobbit is a throwback to much earlier hominids, scientists said, reverse evolution would be the most far-fetched explanation. Dr. Jungers, a paleoanthropologist who organized the symposium, said there were no known examples of mammals becoming significantly reduced in size and anatomy as a consequence of reverting to an ancestral form.

“Is it possible?” he asked rhetorically. “If that is the case, it is unprecedented and a tremendous discovery.”

Several scientists think the answer to hobbit ancestry lies deeper in the hominid past. If this species is unlike H. erectus, it presumably descended from even earlier small-bodied migrants out of Africa that preceded erectus into Asia. Just the thought questions conventional wisdom.

Possible candidates include Homo habilis, the first and least known species of the Homo genus. The short, small-brained habilis might have emerged as early as 2.3 million years ago and lived to co-exist with the brainier, long-limbed H. erectus. At present, erectus fossils, found in the republic of Georgia and dated at 1.8 million to 1.7 million years ago, are the earliest well-established evidence for hominids outside Africa.

If hobbits resemble habilis in some respects, scientists said, it indicates that habilis or something like it possibly left Africa earlier and became the likely hobbit ancestor.

Another possible ancestor might even have been a pre-Homo species of the Australopithecus genus. The first evidence for stone toolmaking in Africa, at least 2.5 million years ago, is associated with australopithecines. Several scientists called attention to skeletal similarities between hobbits and A. afarensis, the species famously represented by the 3.2-million-year-old Lucy skeleton from Ethiopia.

The suggestion that the H. floresiensis ancestor might have reached Asia a million years before H. erectus left Africa was raised earlier this month at a meeting of the American Association of Physical Anthropologists. 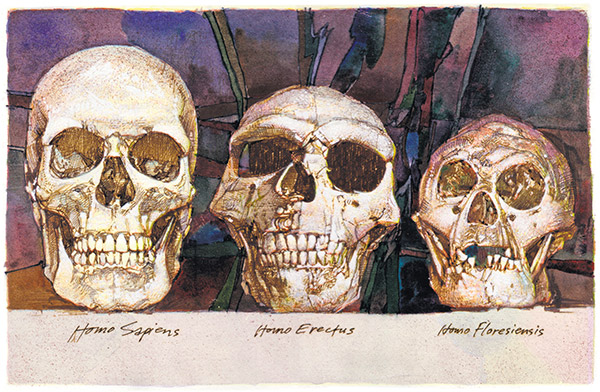 And then there is the idea, raised again at the symposium, of hominid migrations out of Africa and back. Dr. Jungers advised abandoning the old image of the long-limbed H. erectus striding out of Africa in the first wave of hominids making their way in the world.

“Why think they couldn’t have done it many times, even before erectus?” he said. “Other mammals have migrated in and out of Africa.”

The idea revived speculation that erectus itself might have evolved in Asia from an earlier migrant from Africa, and then found its way back to the land of its ancestors. Similarly, other hominids arriving in distant parts of Asia might have churned out new species, among them the hobbits.

Robert B. Eckhardt of Penn State University, an ardent hobbit skeptic, is unyielding in his opposition to the interpretation that the Flores skull belongs to a previously unrecognized species. He insists that it will prove to be from a modern human stricken with microcephaly or a similar developmental disorder that shrinks the head and brain.

“Convincing others is much more difficult than I thought it would be at the outset,” Dr. Eckhardt acknowledged in an e-mail message, “but increasingly it is becoming evident that what is at stake is not just some sample of specimens, but instead the central paradigm of an entire subfield.”

Susan G. Larson, an anatomist at the Stony Brook School of Medicine who analyzed the non-human properties of the hobbit shoulders, said in an interview that the investigations had entered “a period of wait and see.”

“Someday,” Dr. Larson said, “people may be saying, why was everyone so puzzled back then — it’s plain to see where the little people of Flores came from.”