The Ghent Altarpiece, also known as the Mystic Lamb, was completed in 1432 by Flemish Primitive Jan Van Eyck. The painting is surrounded by mysteries concerning, possibly, the Holy Blood(line) of Christ... This also is the reason why the panel of the Just Judges got stolen, the thiefs got killed and the Nazi's were very interested in the mystic masterpiece...

The Ghent Altarpiece, also known as the Adoration of the Mystic Lamb, completed in 1432 by the Van Eyck Brothers (Hubert & Jan), is a large and complex polyptych, originally made for the Joost Vyd Chapel in Saint Bavo Cathedral, Ghent, Belgium. In the eighties, for security reasons, it was removed to another chapel in the cathedral. The Mystic Lamb is regarded as a true artistic highlight of Christianity and of Western civilisation. It is said - but it's not sure - that Hubert Van Eyck started the work and his brother Jan, the famous Flemish Primitive who was attached to the court of the Duke of Burgundy, finished it.

A Masterwork of Mystery

The Ghent Altarpiece consists of a complex series of 24 scenes, with two doors and a central piece which is showing some saints and apostles adoring the Mystic Lamb, or the symbol of Jesus Christ. From the panels to the left and to the right, pious hermits and pilgrims, Just Judges and Knights of Christ are approaching the ceremony in the middle. The upper register shows Christ as a King, between the Virgin Mary and John the Baptist, Adam and Eve. Inside, there are angels singing and making music.

The oil painting offers intricate details and composition, unrivaled realism, mystical meaning and a translucent use of colour which is responsible for the beautiful light. Over the centuries, the masterpieces has retained its luminous colours.

The polyptych, surrounded by mystery, has always been the main attraction of the impressive cathedral of Saint Bavo. After being kidnapped by the French revolutionary forces, some panels of the Mystic Lamb returned to Ghent. In 1816 however, the panels were sold for 100.000 guilders to an antiquary, while the bishopric knew they had a value of at least four times this sum... and indeed, the panels were sold very soon to a museum in Berlin for 400.000 guilders. At the end of the 19th century, these panels were cut lengthwise. In 1919, thanks to the Treaty of Versailles, they returned to Belgium again. Oh yeah, and what are the Knights Templar doing on this very catholic piece of art?

Maybe the greatest mystery of the many mysteries surrounding the Mystic Lamb, was caused by the lower left panel, called the Just Judges. The original panel got stolen in 1934, has never been found and was replaced by a copy. It's Belgium's most famous unsolved mystery. Countless amateur and professional sleuths are still tracking clues. In a BBC interview with crime writer Minette Walters, Ghent's former police chief Karel Mortier referred to the theft as "the art crime of the century".

The Theft of the Just Judges

In the night of April 10, 1934, two panels - the Just Judges and St. John the Baptist - measuring 1.49 x 55.5 centimeter, were stolen from the cathedral. On May 1, the bishop of Ghent received a letter, which said that the sender possessed both panels. The letter was signed "D.U.A.". Provided he would receive 1 million francs for the Judges, he would return St. John without any charge. DUA asked the bishop to answer him through an advertisement in a newspaper, and St. John was delivered at the railroad station Brussels-North. But instead of the requested sum, the authorities only wanted to pay 25.000 francs... and the Just Judges did not return home.

November 25... Arsène Goedertier, aged 57, a broker who lived and worked in the small town of Wetteren, aged 57, collapsed after a speech at a political rally. On his death bed, he informed his friend Georges de Vos in private that he had a file on the crime at his home. Goedertier tried to say more... but finally took the secret in his grave. Later, the police found in his home carbon copies of the messages which had been sent to the bishop by DUA. Only one single cryptic line spoke of the possible whereabouts of the Judges: the panel was "in a place where neither I nor anyone else" could recover it drawing attention.
The wife of Arsène Goedertier revealed that her late husband was an avid reader of detective novels and a true fan of Arsène Lupin, the hero in some of Maurice Leblanc's mystery novels. Arsène, of course, was also Goedertier's first name, and Lupin was a "gentlemen thief". Goedertier had read The Hollow Needle (L'aiguille creuse) several times. The theme of the novel was "art thefts". Arsène Goedertier undoubtedly felt inspired by Arsène Lupin, who always left a trail of coded messages after his thefts. Goedertier used a similar code in his ransom notes.

Arsène Goedertier was an eccentric, but although he might have typed and mailed the ransom notes, I doubt he was the original thief... and he sure didn't act alone. The broker from Wetteren was in a very healthy financial situation. Maybe he chased some sort of a symbolic revenge. Indeed, Goedertier is said to have been "angry" at the Catholic Church.

Since 1956, former police chief Karel Mortier has dedicated himself to the search for the Lost Judges. Mortier beliefs the panel was hidden somewhere in Saint Bavo Cathedral. X-ray investigations however were fruitless. Another policeman, Chris Noppe, is convinced that the Judges are hiding in the coffin of King Albert I. A few months before the theft, the Belgian King - the hero of the Great War - died in a climbing accident, which was possibly a set up for murder. The body of King Albert I now lies in the crypt of the royal family in the palace of Laeken, near Brussels. Belgium's own Miss Marple, Maria De Roo, is defending a conspiracy theory, claiming the authorities retrieved the panel. And I think Goedertier and two accomplices worked for Himmler's SS and were murdered when they double-crossed a nazi agent.

I do believe Van Eyck's painting held a "Da Vinci Code", containing information the true whereabouts of the Holy Grail, also known as the Holy Blood(line) of Christ. In the 16th century, Jan Van Eyck already was described by art historian Giorgi Vasari as an alchemist, suggesting he was a member of a secret brotherhood. In his article 666 = Satan's Song? - Part 2: The Just Judges and Otto Rahn, Philip Coppens says that modern freemasons have noted how Van Eyck depicted a working lodge in a drawing of Saint Barbara.

Jan Van Eyck entered the service of Philip the Good in 1425. The Duke of Burgundy was moving his court between his palaces in Brussels, Lille and Bruges. Van Eyck resided in Lille and mostly in Bruges, where he died in 1440. He performed certain missions for the Duke, but the exact nature of these missions has remained unknown. Both men were very close, the Duke served as godfather to one of Jan's children.

While working on his masterpiece, Jan's patron established the Order of the Golden Fleece. The name has never been fully explained, but it is no secret that Philip was very interested in alchemy. In his palace in Brussels for example, he installed a real "alchemical room". Though Van Eyck was employed by Philip the Good, he took the commission for the Vyd family. He knew he would have to spend a great amount of time on this Ghent Altarpiece. So, even if Jan only completed what Hubert had begun, he needed the consent of his patron. But that seemed to be no problem at all.

The Mystic Lamb clearly depicts Jesus as a King. This was very uncommon in medievalor Gothic paintings. It was also very uncommon in 1432, and even dangerous, to depict a bunch of arch-heretics on your piece of art. Under pressure of King Philip of France, in 1307 many of the Knights Templar were arrested, tortured - so they would give false confessions - and burned at the stake. The Order was disbanded by Pope Clement V in 1312 on the charge of religious heresy and sexual misconduct.

So, here is one of the great Mysteries of the Lamb of God: what are the Templars doing on this "true" catholic masterpiece? The title of the panel is "Milites Christi", Soldiers of Christ, the official name of the Knights Templar. Moreover, they don't look like sinners who are seeking forgiveness, do they? No, this one knight in his shining armour rides with great kings and noblemen, bearing the shield and the banner of the Temple!

On the Ghent Altarpiece, the Mystic Lamb is spilling his blood in the Cup of the Last Supper. This bleeding lamb is common christian iconography, but the Agnus Dei (Lamb of God) and the Chalice usually doesn't show up together with the Templars, who were regarded as the keepers of the Holy Grail... or the secret of the Holy Blood(line) of Christ.

I have developed the "Nazi Plot Theory" for the first time in a book called Mysteries of the Mystic Lamb (Mysteries van het Lam Gods, 1991). Adolf Hitler came into power in 1933, just a year before the Judges got stolen. I do think the Nazi's 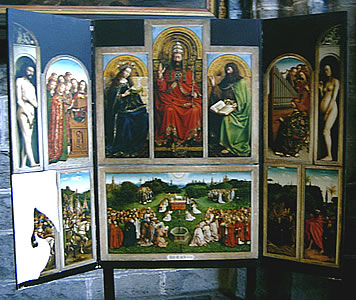 commissioned the theft, because of the mystic and heretic connotations of Ghent Altarpiece. Hitler wanted to seize the iconography of the Mystic Lamb and incorporate it into the Holy Canon of his own "Arian" religion, that had to compete with Christianity.

The Mystic Lamb should be read as a code and some of the panels could be incorporating documents or a map, concerning the Holy Blood brought by the Knights Templar and Thierry of Alsace, Count of Flanders, to Bruges. The first Grail story was commissioned by his son, Philip of Alsace. In the late 19th century the chaplain of the Holy Blood Chapel in Bruges seems to have turned into a satanist. His tale was told by Joris-Karl Huysmans in his book Down There (Là-Bas) and preceded that other story of a satanist priest, who found a treasure and/or a secret concerning the Templars, the Grail and the Holy Blood(line) of Christ. In other words, is the story of Bérenger Saunière, the parish priest of Rennes-le-Château, nothing else than an echo, a hoax, part of a disinformation project designed to turn the eyes of the world to southern France, so that the true secret could remain a secret?

The obsession of the top Nazi's for the Ghent Altarpiece is a matter of record. During World War II, the Ghent Altarpiece was stolen by the SS and hidden in a salt mine near Salzburg. A special agent was sent to Belgium with only one task: finding the Judges! It was to SS-officer Henry Koehn that Goedertier's widow spoke of her husband's fascination for The Hollow Needle. Interestingly, Leblanc's stories of Lupin, a character he created in 1905, showed a great number of indirect references to the mysteries of Rennes-le-Château...

I recently came accross your blog and have been reading along. I thought I would leave my first comment. I dont know what to say except that I have enjoyed reading. Nice blog. I will keep visiting this blog very often.

I recently came accross your blog and have been reading along. I thought I would leave my first comment. I dont know what to say except that I have enjoyed reading. Nice blog. I will keep visiting this blog very often.
Alisha
http://sketchingdrawing.com