Bacchus, on a certain occasion, found his old school master and foster father, Silenus, missing. The old man had been drinking, and in that state had wandered away, and was found by some peasants, who carried him to their king, Midas. Midas recognized him, and treated him hospitably, entertaining him for ten days and nights with an unceasing round of jollity. On the eleventh day he brought Silenus back, and restored him in safety to his pupil. Whereupon Bacchus offered Midas his choice of whatever reward he might wish. He asked that whatever he might touch should be changed into GOLD. Bacchus consented, though sorry that he had not made a better choice. Midas went his way, rejoicing in his newly acquired power, which he hastened to put to the test. He could scarce believe his eyes when he found that a twig of an oak, which he plucked from the branch, became gold in his hand. He took up a stone it changed to gold. He touched a sod it did the same. He

took an apple from the tree you would have thought he had robbed the garden of the Hesperides. His joy knew no bounds, and as soon as he got home, he ordered the servants to set a splendid repast on the table.
Then he found to his dismay that whether he touched bread, it hardened in his hand; or put a morsel to his lips, it defied his teeth. He took a glass of wine, but it flowed down his throat like melted gold.

In consternation at the unprecedented affliction, he strove to divest himself of his power; he hated the gift he had lately coveted. But all in vain; starvation seemed to await him. He raised his arms, all shining with gold, in prayer to Bacchus, begging to be delivered from his glittering destruction.

Bacchus, merciful deity, heard and consented. "Go," said he, "to the river Pactolus, trace the stream to its fountain-head, there plunge in your head and body and wash away your fault and its punishment." He did so, and scarce had he touched the waters before the gold-creating power passed into them, and the river sands became changed into GOLD, as they remain to this day.

Thenceforth Midas, hating wealth and splendor, dwelt in the country, and became a worshipper of Pan, the god of the fields. On a certain occasion Pan had the temerity to compare his music with that of Apollo, and to challenge the god of the lyre to a
trial of skill. The challenge was accepted, and Tmolus, the mountain-god, was chosen umpire. Tmolus took his seat and cleared away the trees from his ears to listen. At a given signal Pan blew on his pipes, and with his rustic melody gave great satisfaction to himself and his faithful follower, Midas, who happened to be present. Then Tmolus turned his head toward the sun-god, and all his trees turned with him. Apollo rose, his brow wreathed with Parnassian laurel, while his robe of Tyrian purple swept the ground. In his left hand he held the lyre, and with his right hand struck the strings. Ravished with the harmony, Tmolus at once awarded the victory to the god of the lyre, and all but Midas acquiesced in the judgment. He dissented, and questioned the justice of the award. Apollo would not suffer such a depraved pair of ears any longer to wear the human form, but caused them to increase in length, grow hairy, within and without, and to become movable, on their roots; in short, to be on the perfect pattern of those of an ass. 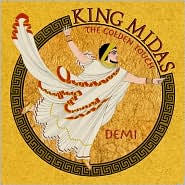 Mortified enough was King Midas at this mishap; but he consoled himself with the thought that it was possible to hide his misfortune, which he attempted to do by means of an ample turban or headdress. But his hairdresser of course knew the secret. He was charged not to mention it, and threatened with dire punishment if he presumed to disobey. But he found it too much for his discretion to keep such a secret; so he went out into the meadow, dug a hole in the ground, and stooping down, whispered the story, and covered it up. Before long a thick bed of reeds sprang up in the meadow, and as soon as it had gained its growth, began whispering the story, and has continued to do so, from that
day to this, with every breeze which passes over the place.

The story of King Midas has been told by others with some variations. Dryden, in the Wife of Bath's Tale, makes Midas' queen the betrayer of the secret.


"This Midas knew, and durst communicate
To none but to his wife his ears of state."

Midas was king of Phrygia. He was the son of Gordius, a poor countryman, who was taken by the people and made king, in obedience to the command of the oracle, which had said that their future king should come in a wagon. While the people were deliberating, Gordius with his wife and son came driving his wagon into the public square.

Gordius, being made king, dedicated his wagon to the deity of the oracle, and tied it up in its place with a fast knot. This was the celebrated GORDIAN KNOT, of which, in after times it was said, that whoever should untie it should become lord of all Asia. Many tried to untie it, but none succeeded, till Alexander the Great, in his career of conquest, came to Phrygia. He tried his skill with as ill success as the others, till growing impatient he drew his sword and cut the knot. When he afterwards succeeded in subjecting all Asia to his sway, people began to think that he had complied with the terms of the oracle according to its true meaning.