The sacred geometry of planet Earth 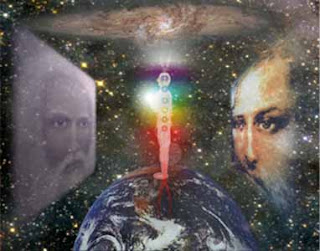 The idea that certain geometric shapes possess some kind of power is very old, as is the idea that certain locations on the Earth are sacred or magical. The elites often apply sacred geometry to architecture; America's capital was built in large part with this in mind, and the most recent additions have included the Washington Monument, an obelisk built by the Freemasons, and the Pentagon, commissioned by Freemason Franklin Delano Roosevelt. But, over the years, a number of researchers and writers have suggested that our entire planet contains a magical geometry which governs the location of sacred sites, and that this geometry may be hyper dimensional, and even that the entire universe was constructed in accordance with the laws of hyper dimensional geometry. At the same time, there is a very ancient belief that all of space is filled with an inexhaustible energy, spiritual in origin, called variously chi, ki, prana, kundalini, vril, odic force, or orgone, and that this energy may serve as a dynamic luminiferous aether, and may be the foundation of all other matter and energy. It has been suggested that this energy flows most strongly along certain paths on the Earth's surface, usually called ley lines. 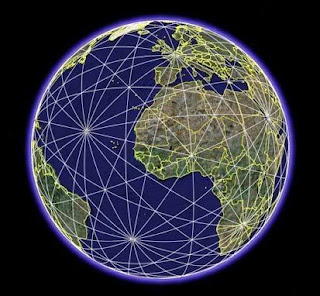 Many years ago, Ivan T. Sanderson suggested that our planet may be attempting to become a crystal. The force of gravity, of course, holds the planet in a roughly spherical shape, but Sanderson suggested that some other force was trying to turn Earth into an enormous crystal, and that certain locations on our planet, regularly spaced, are prone to mysterious vanishings of ships and aircraft, and other paranormal phenomena. Researchers like Carl Munck described a global grid linking ancient sacred sites, and Hugh Harleston Jr. claimed that the ancient ruin of Teotihuacan in Mexico, with its Pyramid of the Sun and Pyramid of the Moon was built according to tetrahedral geometry, and he suspected that the entire universe was constructed according to tetrahedral geometry.

Bruce Cathie, a former airline pilot from New Zealand, developed some of these ideas into an overall theory. He suggested that the Earth somehow contains or is trying to become a regular icosahedron, and that ancient sacred sites like Stonehenge and Teotihuacan are sited according to a "world grid" based on this. According to his theory major ley lines intersect at or near its vertices, and he believed that ufos travel along the ley lines, which are separated from one another by thirty minutes of arc (one half a degree). Of course, this is counting even the minor ley lines.

In recent years, these ideas have been popularized and further developed by Richard Hoagland. Hoagland pointed out that if a regular tetrahedron of the right size existed witin a sphere like the spinning Earth, and one of its vertices were at the South Pole, the other three vertices would be spaced one hundred and twenty degrees apart some 19.47 degrees (an irrational number, like most constants) north of the equator. He pointed out that major upwellings of energy seem to cluster within

a degree or two of one of these locations, like the immense Hawaiian volcanoes on Earth, the Olympus Mons volcano (the highest and most massive mountain in the Solar System) the Great Red Spot on Jupiter, and the Dark Spot on Neptune. These may be north or south of the equator, depending on the planet.

Hoagland also suggested that the current paradigm in physics, based on the twin pillars of relativity theory and quantum mechanics, may be in need of serious revision, and that physics may have been close to a grand unified theory with the original equations of James Clerk Maxwell, before Oliver Heaviside and others simplified and altered them. He believed that much of the energy of the Sun and other stars came not from hydrogen fusion, but from a universal energy from a higher, hypredimensional source, and that this energy also accounted for much of the internal heat of the planets. The energy in stars and planets (and, some of us have noticed, the intensity of their magnetic fields) seems to correlate at least roughly with their angular momentum. Of course, if all of this is true, it may be possible for us to tap this energy and perhaps also to achieve gravity control. Two mysterious hexagons surround the north pole of the planet Saturn; the main one is 15,000 miles across and, per infrared photos, extends at least sixty miles down into the planet's interior. It does not move with the wind driven clouds, but rotates every ten hours and thirty nine minutes, as do Saturn's radio emissions. This is probably the period of axial rotation. Physicists and astronomers currently have no explanation for any of this.

Long ago, a man named Ernst Chladni tried sprinkling sand on a flat metal plate and using sound to vibrate the plate. The sand grains would arrange themselves into geometric shapes, caused by standing waves, and, the higher the frequency became, the more compex the shapes became. The study of this is called cymatics, and some have suggested that this might be the cause of Saturn's hexagon; perhaps this theory and Hoagland's are not mutually exclusive.

Certainly, there is at least some evidence that something strange is going on along lines in the Earth, specifically earthquake faults and the rift zones that separate Earth's tectonic plates. Paranormal phenomena do seem to cluster at such locations, including earthquake lights.

Most of the known early developments of human culture, including the first known civilizations and the development of the major religions happened in or near these zones or (as in the case of Egypt) along earthquake faults parallel to the rifts. Clearly, this needs to be investigated, but we have to remember that the known cultures were almost certainly not the first. A look at a map or globe of the Earth reveals some interesting oddities. Remember the triangles forming the faces of tetrahedrons and icosahedrons? All but two of Earth's continents are at least roughly triangular. Anyone can see that South America and Africa are roughly triangular. North America is not as obvious, since its shape is interrupted by, among other things, the Florida peninsula. Even Eurasia is at least very roughly triangular, with its shape marred by the Indian subcontinent. In all of these, one apex is more or less to the south, and one side makes up the north of the continent. Another oddity: most of the largest peninsulas on Earth point roughly toward the equator. The exceptions to the triangular continent pattern are Australia and Antarctica. Even if we include Tasmania and New Guinea as part of Australia (which, geologically, under very shallow water, they are) it is still not remotely triangular.

But Antarctica, located around the South Pole, may not be the exception it seems. Earth has no Saturn-style hexagon, perhaps because the Earth has a solid crust and mantle, but both Antarctica and the Arctic Ocean are roughly circular, which is at least fairly close to hexagonal. And the strangeness does not end there. The Arctic Ocean covers 5,400,000 square miles, and Antarctica is only a tiny bit larger, just over 5,400,000 square miles. The greatest depth in the Arctic Ocean is 18,000 feet and the highest point in Antarctica, the Vinson Massif, is only 2,000 feet off at 16,050 feet above sea level. But we don't want to make too much of all this, since Earth's tectonic plates are not triangular, and, anyway, the current arrangement and shape of the continents is only temporary; continental drift has changed it greatly over the aeons.

But maybe there is something very special about the current age...

Labels: Secrets of the universe