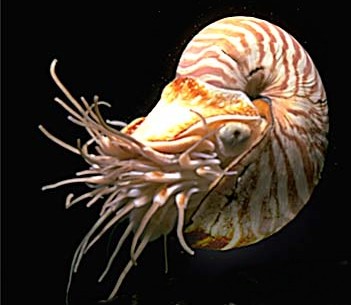 The curious-looking chambered nautilus, also known simply as the nautilus, is considered by many to be a living fossil. Nautilus pompilius is the largest and most common of about six species known to exist. Like the coelacanth, it has remained unchanged for over 400 million years. During prehistoric times, there were about 10,000 different species of nautilus, but only a small handful are known to survive today. The nautilus is a mollusk and a member of the cephalopod family. It is closely related to other cephalopods such as the squid, cuttlefish, and octopus. Like most cephalopods, it can use jet propulsion to attain speeds of over two knots. A small tube near the animal's tentacles, known as a siphon, expels water under pressure. This propels the nautilus in the opposite direction at high speeds.
The life and habits of the nautilus are still largely a mystery, since it spends most of its time in deep water. The shell of the nautilus is comprised of many individual chambers. Each chamber is individually sealed and contains an amount of gas. This provides the animal with buoyancy. The nautilus can regulate its density by injecting or removing fluid into these chambers through a system of tubes. This strong shell also provides protection for the animal's soft body. The nautilus has many more tentacles than its close cousins. Depending on the particular species, there can be up to 90 separate tentacles. The tentacles are arranged into two circles, and unlike those of other cephalopods, they have no suction cups.

These tentacles are used to catch shrimp, fish and small crustaceans, which the animal crushes with its powerful beak. Nautiluses are active predators, but since their siphon system uses very little energy while swimming, they only need to eat about once a month. Their eyesight is very poor because their eyes contains no lenses. Instead, there is only a tiny hole to allow light into the eye. This system operates much like a pinhole camera. The nautilus is thought to rely mainly on its sense of smell when searching for food or looking for a mate. An adult nautilus can grow to about eight inches (20 centimeters) in length.

The Nautilus reproduces by laying eggs. The eggs are usually attached to rocks in shallow water, hidden away from curious predators. These eggs require between eight and twelve months to fully develop. When a young nautilus first hatches from its egg, it is about an inch in diameter and has a shell with seven chambers. The young animal will drift and feed on plankton and other small prey as it grows. As it gets larger, it will add new chambers to its shell. Each new chamber will be a little larger that the last, allowing the opening of he shell to continually grow larger. The average life span of the nautilus is believed to be about 20 years, which is unusually long for a member of the cephalopod family.

Nautiluses are found throughout the Pacific and Indian oceans, where they spend their daylight hours at depths of about 1,800 feet (550 meters). At night they migrate to shallower waters to feed among the coral reefs. The shell of the nautilus cannot withstand the pressure of depths greater than 2,600 feet (800 meters). Unfortunately, nautilus populations are on the decline due to the harvesting of their beautiful shells. Because of this, export of the shells has been banned in may countries throughout the world. You can help save this amazing animal by refusing to buy nautilus shells.
Posted by crkota at 7:15 PM