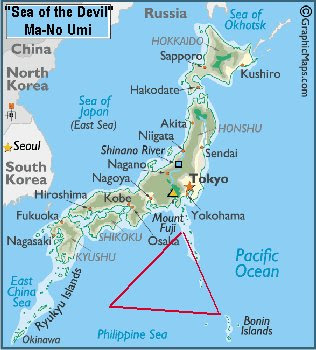 One of the strangest emails I received came in regarding the Devil's Triangle. It reads in part:
"I was on a flight headed to Tokyo and I was in the window seat and as I was looking down I noticed a strange green mist over the ocean. As we were flying over the green mist (or was it fog?) the mist seemed to notice the airplane that I was on. It seemed to grow tentacles and I swear it seemed like it was reaching for the airplane. As I pointed this out to my mother, we were already past the strange mist. The mist was also rotating as if it were making a tunnel of some sort. I believe I witnessed something supernatural in the Devil's Triangle. If you..........Robbie."
It appears that areas of strange phenomenon such as the Dragon's Triangle is always associated with fog or mist. Case example. The Philadelphia Experiment.

It is rumored and not substantiated that when the Philadelphia Experiment was taking place, scientists were using electric and magnetic fields and created an artificial fog to hide the ship. Powerful magnets were supposingly used. When these magnets were used and placed over calibrated rails and pulled towards a center, a bluish glow appeared that later took the form of a blue fog. One of the project coordinators for the Philadelphia experiment disappeared for an instant in the bluish fog and reappeared. When questioning this person, they described seeing a futuristic city with high towers. Could it be that this project coordinator was teleported through a dimensional rift via the fog? Could it be that somehow a black hole super gravitational effect was created with the use of powerful magnets? It is said that environmental changes occur at the Bermuda Triangle and the Devil's Triangle. The same thing would happen if a maverick moving black hole were to come close to Earth, the first thing we would notice is the changing weather patterns. Somehow a fog is created when there is a distortion of the time/space continuum, it appears that way with the Moberly/Jourdain Versailles Time Slip, in which the two ladies Moberly and Jourdain went from their time period of 1901 to the period of the French Revolution. Before entering the time slip, they noticed a low fog. As they entered the fog, they found themselves back in time.

Also, it is interesting on how UFOs and USOs (which are probably one and the same) are attracted to areas like the Bermuda Triangle and Devil's Triangle. Could it be that these areas are high energy sources for UFOs? Energy that UFOs can use as a fuel source to power their ships? Is the fog or mist that is seen, some kind of electrical or magnetic discharge? When the electrical magnetic forces pushes towards a high crescendo, it emits a fog like substance? Is that the reason why some UFOs are seen with a mist surrounding their ship?
Another case example is when three soldiers witnessed the bizarre disappearance of an entire battalion in 1915. They said a fog bank seemed to swallow up the battalion. It occurred during the infamous Gallipoli campaign of WWI. Three members of a New Zealand field company watched as a battalion of the Royal Norfolk Regiment marched up a hillside in Suvla Bay, Turkey into a heavy fog. They never came out. After the last of the battalion had entered the fog, the fog lifted up into the sky and became one with other clouds. The battalion was never seen again. I recently talked on the phone with John A. Vasquez who claims that in 1977, 1300 soldiers were abducted by UFOs at Ft. Benning, Georgia. I would be curious if any kind of fog appeared when these soldiers were taken. I once talked on the phone with Travis Walton who was abducted by a UFO, he mentioned besides the large light that lifted him 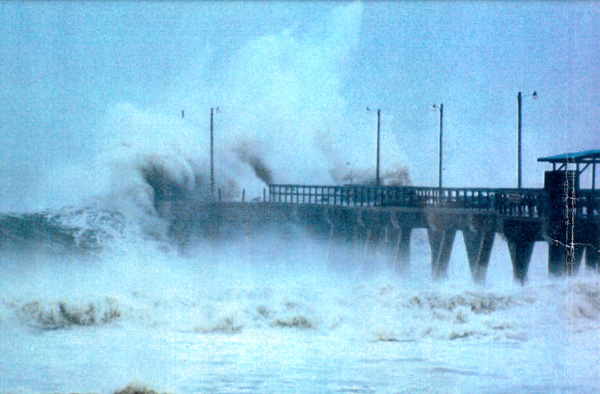 into the ship, there was a mist around the Arizona landscape where the UFO was hovering. What is it with this mist?
Then a man named Gernon was a first hand witness to this strange phenomenon, that some people call electronic fog. On December 4, 1970, Gernon and his dad were flying their Bonanza A36 over the Bahamas. On route to Bimini they

encountered a strange cloud phenomena. It appeared to be a tunnel-shaped vortex. As they flew their plane into the vortex, they could hear the plane's wings scrape along the side of the vortex. All of the plane’s electronic and magnetic navigational instruments malfunctioned. The magnetic compass spun inexplicably. As they neared the end of the tunnel, they expected to see clear blue sky. Instead, they saw only a dull grayish white for miles and miles and miles. They could not see any ocean, sky or horizon for that matter. After flying for 34 minutes, they found themselves over Miami Beach. A flight like this would have taken 75 minutes.
To get to the bottom of this mystery, we need to do laboratory experiments to see if we can recreate electronic fog by the force of magnetic energy. And with this experiment to see if there is a disturbance in the space/time continuum. I believe the fog and mist has something to do with paranormal anomalies of time slips or dimensional slips. I am not a scientist, it's just a hunch...

The polar opposite of the Bermuda triangle is actually off the coast of austrailia.

Reminds me of 'the mists of avalon'.