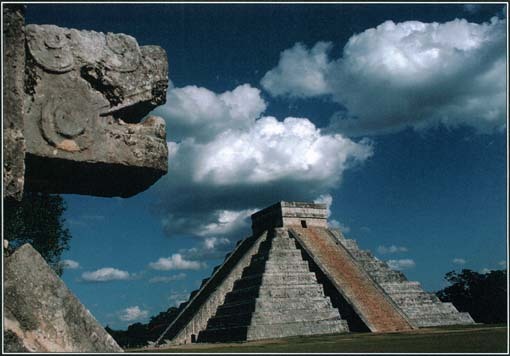 Unlike the cultures of the Valley of Mexico, the only period in which the urban centers were important to the Mayas was during the Classic period from 300 to 900 AD. The culture of the Mayas, however, has little changed from the classic period to the modern period, for Maya culture was largely tribal and rural all throughout the Classic period. What distinguishes Classic from post-Classic Maya culture was the importance of urban centers and their structures in the religious life of the Mayas and the extent of literate culture.

The Mayas were never a "true" urban culture; the urban centers were almost entirely used as religious centers for the rural population surrounding them. Therfore, the decline of the urban centers after 900 AD did not involve titanic social change so much as religious change; it is believed by some scholars that the abandonment of the cities was primarily due to religious proselytizing from the north. Nevertheless, the Classic period saw an explosion of cultural creativity all throughout the region populated by the tribes we call "Mayan." They derived many cultural forms from the north, but also devised many cultural innovations that profoundly influenced all subsequent cultures throughout Mesoamerica. Much of Maya culture, particularly the religious reckoning of time, is still a vital aspect of Native American life in Guatemala and Honduras. Classic Maya culture developed in three regions in Mesoamerica. By far the most important and most complete urban developments occurred in the lowlands in the "central region" of southern Guatemala. This region is a drainage basin about sixty miles long and twenty miles wide and is covered by tropical rain forest; the Mayas, in fact, are only one of two peoples to develop an urban culture in a tropical rainforest. The principal city in this region was Tikal, but the spread of urbanization extended south to Honduras; the southernmost Mayan city was Copan in northern Honduras. In the Guatemalan highlands to the north, Mayan culture developed less fully. The highlands are more temperate and seem to have been the main suppliers of raw materials to the central urban centers. The largest and most complete urban center was Palenque. The other major region of Mayan development was the Yucatan peninsula making up the southern and eastern portions of modern-day Mexico. This is a dry region and, although urban centers were built in this region, including Chichen Itza and Uxmal (pronounced "Oosh-mal"), most scholars believe that this was a culturally marginal area. After the abandonment of the Classic Mayan cities, the Yucatán peninsula became the principal region of a new, synthetic culture called Toltec-Mayan which was formed when Toltecs migrating from the north integrated with indigenous Maya peoples. 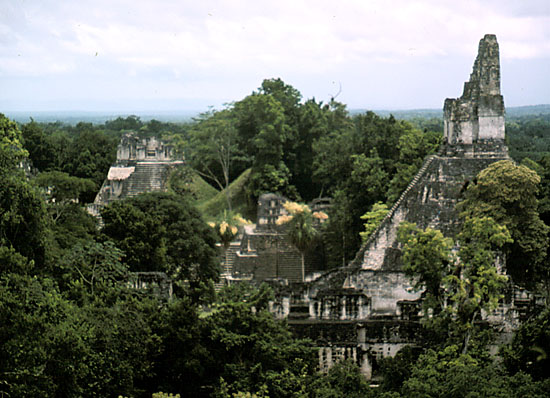 Almost all the urban centers were built in tropical rain forest. This is the singularly most important fact of Mayan cultural development and probably the most significant reason why the Mayans never developed a fully urban culture. For tropical rain forest is extremely difficult to live in; despite its lushness and moisture, tropical rain forest can only support small human populations. While plant and animal growth seems almost out of control and the rains never stop, tropical rain forest makes extremely poor agricultural land. As a consequence, a greater amount of area is required to support each person—this encourages population dispersal rather than the concentration necessary to do things like build cities and temples and such. It has been estimated that there were never more than 30 people per square mile during the classic period. So the Mayan accomplishment is truly awe-inspiring! With a difficult life, with heat and humidity that would melt the hardiest North American, and with a very sparse population, the Mayans built incredibly sophisticated urban centers, an astronomical science and mathematics among the most sophisticated in the pre-modern world, and the most developed and complex system of writing in the Americas.

The Mayans enter history with the diffusion of certain architectural styles throughout the Mayan cultural area. The early diffusion of this architecture, which includes stelae (stone, flat columns) and corbelled vaults, and culture is called the Early Classic Period (292-593). The Late Classic Period (593-889) is characterized by the efflorescence of Maya culture in over ninety cities and the widespread use of writing.


The cities the Mayas built were ceremonial centers. A priestly class lived in the cities, but for the most part the Maya population lived in small farming villages. The priestly class would carry out daily religious duties, particularly sacrifices, and the peasants would periodically gather for religious ceremonies and festivals. For reasons that we don't understand, the Mayas, abandoned their cities around 900 AD. There is evidence of invasion from the outside and its possible that economic difficulties led them to abandon the cities. The greatest change seems to be the disappearance of the priestly class; with this disappearance, the Mayas stopped working on their cities. The peasans seem to have continued to use their cities for a time, but that eventually came to a halt as well. Life for the Mayas did not really change drastically after the decline of their cities, for the cities were central only in their ceremonial life.
Maya population was in general very small, and very few of the Mayas permanently lived in the urban centers. The central reason for this is the nature of agriculture in tropical rain forest. The Mayas, like others forced to cultivate tropical rain forest, practiced slash and burn agriculture. Because growth is so rapid in tropical rain forests, the nutrients provided by dead plants and animal feces gets used up very quickly. Rain forest soil, surprisingly, is remarkably unfertile for agriculture. In slash and burn agriculture, the Mayans would cut down a swath of forest, burn the felled trees and plants for fertilizer, and then cultivate the plot. Now as then the Mayans did not employ sophisticated fertilization techniques, so the plot of land would be exhausted in two to four years (some archaeologists estimate that it may have taken as long as seven years if the Mayans weeded by hand rather than using tools). What all this means is that it takes an immense amount of land to support a family—among the Maya, it probably required at least seventy acres for every five people. The population, then, throughout the Classic Period was very small. Slash and burn agriculture (called milpa by the Mayas) is also labor intensive. Modern-day Native Americans in Guatemala who employ this agriculture spend about 190 days every year in agricultural work. Despite this labor, you can see that at least 170 days are left over (almost half of a year) for other types of labor. This excess time was used in the Classic Period in the building and maintenance of cities as well as the extensive production of art-work and the agricultural labor necessary to support the priestly populations in the cities.

The principal food of the Mayas was maize and maize production was the central economic activity of the Mayas. Milpa farming itself, which is dependent on a holistic view of one's activities since the cultivated plot keeps moving, seems to have been the foundational basis of the Mayan religion and the Mayan concern with time.

We know almost nothing of Mayan society beyond the social division between the priests and the peasants. Mayan society had several strata: rulers, priests, commoners, and slaves. The extent to which the rulers were differentiated from the priests is unknown. At the top of the Mayan hierarchy was the halach uinic ("True Man"), whose position was hereditary. The halach uinic ruled both domestic and foreign affairs with the help of a council. Lesser chiefs ruled smaller social units.

In the religious hierarchy, the head was called Ah Kin Mai ("The Highest One of the Sun") who ruled over all the priests below him (called Ah Kin , "The One of the Sun"). There were two special priestly functions involved in human sacrifice: the chacs , who were elderly men who held down the victim, and the nacon , who cut the living heart from the victim.

Mayas had a sense of physical beauty very different from other peoples in Mesoamerica. They prized a long, backward sloping forehead; in order to attain this look, infants would have their skulls bound with boards. Crossed-eyes were an important item of physical beauty; infants would have objects dangled in front of their eyes in order to permanently cross their eyes (this is still practiced today).

Mayan religion grew primarily out of the milpas agriculture which required accurate predictions of time and accomodation to the cycles of life in the rain-forest. There is one overwhelming aspect to Mayan religion: it is based on accomodating humanity to the cycles of the universe. The universe functions in a logical, cyclical, and predictable way; human beings can exploit that cyclical nature by accomodating themselves to these cycles.
For this reason, Mayan religion is obsessed with time. In order to correctly orient oneself to the cycles of time, one must be able to calculate these cycles with great accuracy. To this end, the Mayas developed a number of calendrical systems. At the center was the tzolkin , or sacred calendar, which consisted of 260 days; this calendar worked on two cycles, a cycle of 13 numbered days and a cycle of 20 named days. These two cycles would repeat themselves every 260 days. In addition, they had the tun , or ceremonial calendar, which was 360 days long plus five concluding, unlucky days. Another calendar was the katun , which was a cycle of 20 tuns . They also used a Venus calendar (584 days), a half-year lunar calendar, and cycles of the sky gods. In combination, these calendars made the Mayans the most accurate reckoners of time before the modern period reaching an accuracy of being one day off every 6000 years (which is far more accurate than our calendar). All the days of these calendars in their incredible complexity served as astronomical almanacs that rigidly controlled behavior and religious ceremony. It is not unfair to say that Mayan life was one long continuous cycle of religious ceremonies.

Religious ceremonies involved several aspects: dancing, competition, dramatic performances, prayer, and sacrifice. The gods required nourishment from human beings in order to work. While sacrifice often involved foodstuffs, the bulk of sacrifice involved some form of human sacrifice. The majority of this human sacrifice was blood-letting, in which a victim, usually a priest, voluntarily pierces a part (or parts) of their body&$151;usually their tongue, ears, lips, or penis—and "gives" blood to the gods. The higher one's position in the hierarchy, the more blood was expected. Some ceremonies demanded the living heart of a victim, in which case the victim was held down by the four chacs at the top of a pyramid or raised platform while the nacon made an incision below the rib cage and ripped out the heart with his hands. The heart was then burned in order to nourish the gods.

The Mayas believed that the world had been created five times and destroyed four times; this eschatology became the fundamental basis of Mesoamerican religion from 900 AD onwards when it was adopted by the Toltecs. Most of the Mayan gods were reptilian and they all had dual aspects, that is, each god had a benevolent aspect and a malevolent aspect. The Mayas believed in an elaborate afterlife, but heaven was reserved for those who had been hanged, sacrificed, or died in childbirth. Everyone else went to xibal , or hell, which was ruled over by the Lords of Death.