Description:double-headed serpent-dragons with heads at each end of its body. Its name means 'goes both ways' in Greek as it could reportedly stick one head inside the mouth of the other, and roll to where it wanted to go. Some pictures of this creature depict it as having feet, others just as a snake.It was said to be a very evil creature. Pliny recorded medicinal properties of the beast. Wearing a live amphisbæna will protect pregnant women, and wearing a dead one is a remedy of rheumatism.

Dragonet
Element : Earth
Description : They are small dragons less than 1.5 m high but very fierce and hostile to humans. Famous: the dragons of Wilser who lived on the mount Pilate (Switzerland) had poisoned blood and exhaled fire.

Element : Earth
Origin: Germany, Gaule (France)
Description: A drake is a dragon with only legs and no wings. FireDrakes have the breath of flame, and are usually reddish in color. In Europe many cities were named after this dragon: Drakeford, Drakeshill, Draguignan,...
Lore: They often live in caves and guard great treasure. They breath fire to defend themselves. Famous: Wiglaf, the firedrake killed by Beowulf

Hydra
Origin: Greece Description: many headed dragon who either have wings, or wingless. When one head is cut off, two more grow from the spurting blood.
Famous : the Hydra of Lernea, the Beast of the Apocalypse

Element : Water
Description: A drake is a dragon with only legs and no wings. Icedrakes exhaled snow and hail and are usually white or light bluish in color. These types of dragons do not fly, they look like large lizards being about 5-20 m long.

There are no trace of dragons as made up of different parts of animals in India. The closest creature is the Naga which inherited of many characteristics of the dragon.
Description: pseudo-dragons who are usually portrayed as having a human head, serpentine body, and no wings.
Origin: The word Naga is rooted in Sanskrit and means "Serpent". It is one of a handful of rare words surviving the loss of the first universal language. Even in Mexico, we find the "Naga" which becomes "Nagal."
Powers: Nagas were patrons of water and clouds, but could cause flooding or drought if disturbed. In some stories, the naga can shape-change at will from human to snake form Symbol: In the Esoteric Tradition it is synonymous for Adepts, or Initiates. In India and Egypt, and even in Central and South America, the Naga stands for one who is wise. Nagarjuna of India, for example, is shown with an aura, or halo, of seven serpents which is an indication of a very high degree of Initiation. Nagarjuna are called in Tibetan, Lu-trub. The symbolism of the seven serpents, usually cobras, are also on Masonic aprons of certain systems in the Buddhistic ruins of Cambodia (Ankhor) and Ceylon. In China, the Naga is given the form of the Dragon and has a direct association with the Emperor and is known as the "Son of Heaven" while in Egypt the same association is termed "King-Initiate". The Chinese are said to have originated with the Serpent demi-gods and even to speak their language, Naga-Krita. In the Western traditions we find the same ubiquity for the Naga, or Serpent. One simple example is the Ancient Greek Goddess, Athena. She is known as a warrior Goddess as well as the Goddess of Wisdom; her symbol being the Serpent as displayed on her personal shield. An apocryphal tradition says that Apollonius of Tyana, while on a visit to India, was taught by the "Nagas" of Kashmir. (See The Life of Apollonius, by Philostratos.) The Serpent's reputation for positive medicinal and/or life-preserving qualities is still present through seen the employment of the Caduceus.
Oriental Dragons
Element : Water

Powers: Some of the worst floods in Asia's History were caused when a mortal has upset a dragon. Dragons were essentialy linked to the water element, influencing the weather and the water courses. According to Chinese mythology, a dragon has to spend 1000 years under the sea, 1000 years in the mountains and 1000 years among men before turning into a real dragon. Before that he is a small serpent prisoner of a stone, called a “serpent’s egg”. After 3000 years, the dragon escape and take his adult form, the stone was known to spill a magic liquid called “inky blood”.
Friend/Foe : In the Eastern world the dragon has a rather different significance than in the West. He is essentially benevolent, son of heaven, and controls the watery elements of the universe.In many cases the dragon is combined with the phoenix to symbolize long life and prosperity. It is also combined with the tiger to represent heaven and earth or inyo (Yin and Yang).
Description : Having sinuous serpentine bodies and four legs, eastern dragons do not usually breath fire, nor do they fly. According to Wang Fu (Han 206 BC-220 AC)dragons are made up of many different types of animals of the Earth: the body of a snake, scales of a carp, head of a camel, horns of a deer, the eyes of a hare, ears like a bull, a neck like an iguana, belly of a frog, paws like a tigers, and claws like an eagle.

A lion-type mane decorates its neck, its chin, and each elbow. They also carry two antler-like horns on their wide-mouthed head, and two long whiskers spread out from their snout. They are depicts in many colors like blue, black, white, red, or yellow. Oriental dragons are usually shown with a pearl in their mouth, under their chin, or in their claws. This is apparently where the dragon gets its power, and how it ascends to heaven. The male dragon holds a war club in its tail while the female dragon holds a sensu or fan in its tail.
Types
There are many different kinds of dragons. Some live in the air, some live in the sea, and some live underground. The legends of China include a white lunar (moon) dragon. Others include the the Spiritual, The Dragon of Hidden Treasures, the Winged, the Horned, the Coiling, and the Yellow. The chinese have a dragon to help them for each circumstance of their life. In China dragons are known as Lung.Yu-Lung which looks like a fish give success to exams. Eastern dragons can be classified according to the number of claws they have. Most five clawed dragons are Chinese. Three clawed dragons are Japanese. Four clawed dragons are Chinese, Indonesian or Korean.
Ourobouros 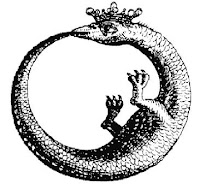 Aka: oroborus, uroboros, and oureboros.
Description: a serpent whose end is his beginning as he endlessly eats his own tail.
Origin: The Serpent biting its own tail is first seen as early as 1600 years BC in Egypt. From there it moved to the Phonecians and then to the Greeks, who called it the Ouroboros, which means devouring its tail Famous: The serpent biting its tail is found in other mythologies as well. In Norse mythology Jörmungandr circles the entire world whith his huge body., in Hindu mythology the snake circles the tortoise which supports the four elephants that carry the world. Symbol: the serpent biting, devouring, eating its own tail symbolises the cyclic Nature of the Universe: creation out of destruction, Life out of Death. The ouroboros eats its own tail to sustain its life, in an eternal cycle of renewal. It is also an emblem of immortality. Its endless representation with its tail in its mouth (Ouroboros), and the constant renewal of its skin and vigor, enliven the symbols of continued youth and eternity. Alchemically, the ouroboros is also used as a purifying glyph. He keeps the cosmic waters under control, and is symbolic of the cyclical nature of alchemical work. He is the basilisk, the alchemical serpent.
Western Dragons 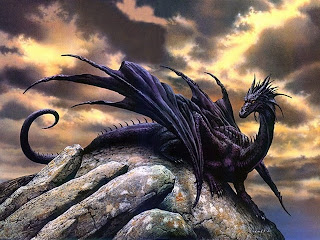 Element : Earth and Water
Description: The Western type of dragon has been variously described. He appears to be created from parts of various creatures, having eagle's feet, two bat-like wings, lion's forelimbs, reptile’s head, fish's scales, antelope's horns and a serpentine form of spade tail, which occasionally extended to the head.He can be of any color and some species can even change the color of their skin just like a chameleon. They usually breath fire but this is not a general trait.
Powers: Those dragons usually have huge hoards of gold and jewels hidden in their lairs. They are known to live more than 300 years, some western dragons are even immortal.
Friend/Foe: They do not eat too often and can live on a sheep or ox once a month. They are usually portrayed as evil, mean, and bloodthirsty which is a consequence of the demonization exerced by the Church.
Famous: The end of the dragon came with Christianity as the Church declares them as enemies and send hords of knights to struggle against them. As a result, most dragons have been destroyed (and even more knights have been burned).

Magic: Eating a dragons' heart will give the the power of understanding the language of animals, eating the dragons' tongue enables to win any argument, and rubbing the dragons' blood on skin will protect against stabs

Description: These are dragons which have neither legs nor wings
Origin: Worms are known to be the first incarnations of dragons. They are linked to water and are omnipresent in most primitive cultures (Australia, Africa, Amazonia)
Famous: the Lambton Worm.
Lore : forests and wells and any dark place near water 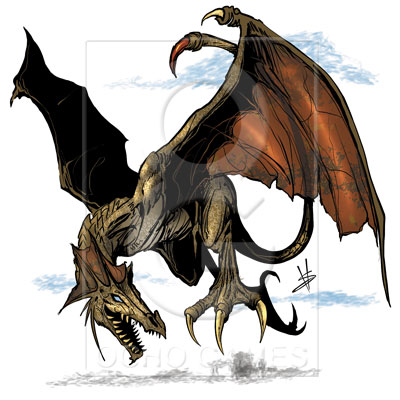 Aka: Wyver, Lindworm, Lindorm, Wouive, Vouivre
Element : Earth
Description: two-legged dragon with two wings, a serpent’s head and the claws of an eagle.In modern images, they may have claws on the wings and a sting filled with poison on the end of its tail. The French Wyvern known as a Vouivre or Wouive, is portrayed with the head and upper body of a voluptuous woman with a ruby or garnet set between her eyes that help her to find her way through the Underworld.
Origin: from the Old French wyvere which means both viper and ‘life’. They were also very popular mountains of central europe and in Sweden
Friend/Foe : Wyvern are frequent in heraldry and are considered a sign of strength to those who bear the symbol. Wouive is the good ‘Genius’ who hovers protectively over the countryside and masters the underlying currents of the earth. She is ‘the spirit that breathes or inspires.’ 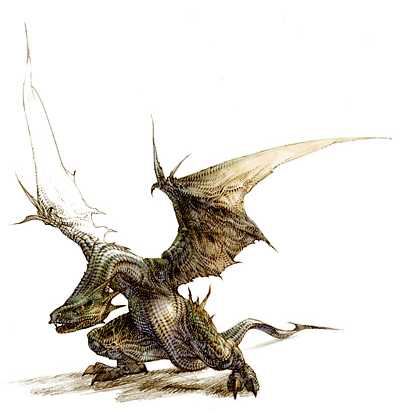 The ancients represented these currents, that today we term cosmic or magnetic, by winged serpents. Neverthelessthe Wyvern appears in some western folk tales as a malign and violent predator with a fierce head, bat’s wings and a tail that sometimes has an extra scorpion-like head on its end. The life-giving aspect of the Wyvern is inverted in favour of death as she takes life. The Wouive’s ‘Breath of Life’ has been reversed, for the Wyvern is said to have poisonous and corrupt breath. These dragons symbolise envy, war, pestilence, and viciousness.
Famous: Marco Polo met and described Lindworms while crossing Central Asia. They were quick and mighty enough to take down a man on a galloping horse.
Posted by crkota at 2:05 AM