A fairy (also fay, fey, fae, faerie; collectively, wee folk, good folk, people of peace, and other euphemisms) is the name given to a type of mythological being or legendary creature, a form of nature spirit, often described as metaphysical, supernatural or preternatural.
The concept of fairies is based on the fae of medieval Western European (Old French) folklore and romance. Fairies are often identified with a variety of beings of other mythologies. Even in folklore that uses the term "fairy," there are many definitions of what constitutes a fairy. Sometimes the term is used to describe any magical creature, including goblins or gnomes: at other times, the term only describes a specific type of more ethereal creature. 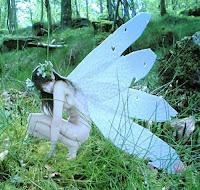 Fairies are generally described as human in appearance and having magical powers. Their origins are less clear in the folklore, being variously dead, or some form of angel, or a species completely independent of humans or angels. Folklorists have suggested that their actual origin lies in a conquered race living in hiding, or in religious beliefs that lost currency with the advent of Christianity. These explanations are not always mutually incompatible, and they may be traceable to multiple sources.

Much of the folklore about fairies revolves about protection from their malice, by such means as cold iron (fairies don't like iron and will not go near it) or charms of rowan and herbs, or avoiding offense by shunning locations known to be theirs. In particular, folklore describes how to prevent the fairies from stealing babies and substituting changelings, and abducting older people as well.Many folktales are told of fairies, and they appear as characters in stories from medieval tales of chivalry, to Victorian fairy tales, and up to the present day in modern literature. 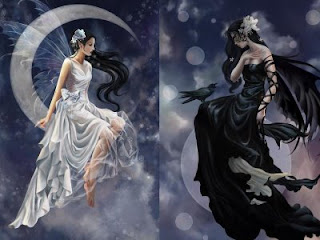 Fairies are generally portrayed as human in appearance and as having supernatural abilities such as the ability to fly, cast spells and to influence or foresee the future. Although in modern culture they are often depicted as young, sometimes winged, females of small stature, they originally were depicted much differently: tall, radiant, angelic beings or short, wizened trolls being some of the commonly mentioned. Diminutive fairies of one kind or another have been recorded for centuries, but occur alongside the human-sized beings; these have been depicted as ranging in size from very tiny up to the size of a human child. Even with these small fairies, however, their small size may be magically assumed rather than constant. 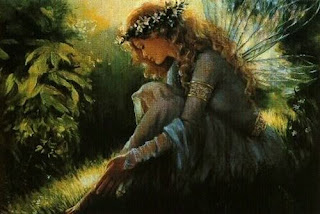 Wings, while common in Victorian and later artwork of fairies, are very rare in the folklore; even very small fairies flew with magic, sometimes flying on ragwort stems or the backs of birds. Nowadays, fairies are often depicted with wings of various shapes:
-Like the wings of ordinary generalized winged insects, e.g. as the image at this link.
-Like butterfly wings (butterfly fairies), e.g. as the image at this link.
-Various fantastic shapes.
Various animals have also been described as fairies. Sometimes this is the result of shapeshifting on part of the fairy, as in the case of the selkie (seal people); others, like the kelpie and various black dogs, appear to stay more constant in form.
Posted by crkota at 12:23 AM