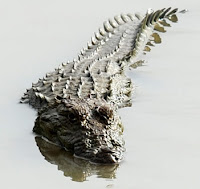 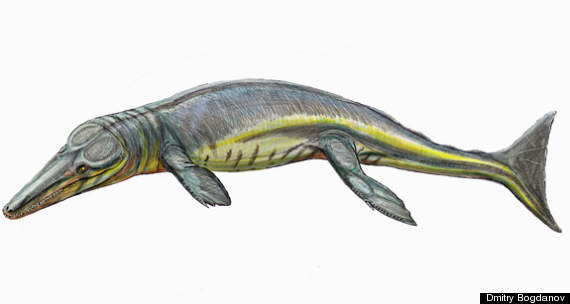 The predator possessed a long snout, large flippers, armorless skin and a tail fin where the bottom half is larger than the top half, resembling an upside-down version of an ordinary shark's tail fin.It's uncertain how large Tyrannoneustes was, but the right side of its lower jaw was at least 26 inches (67 centimeters) long. It featured enlarged teeth with serrated edges, and a jaw that evolved to open wider, allowing it to swallow smaller prey whole.
Back when Tyrannoneustes was alive, the area in central England where the fossils were discovered was covered in a shallow sea encompassing much of what is now Europe. Originally found between 1907 and 1909, the fossil has been lost in a drawer at the Hunterian Museum and Art Gallery in Glasgow for nearly 100 years.

There are no modern descendents of the animal. Instead, this predator was a kind of metriorhynchid, an extinct family of marine crocodiles.

The discovery of Tyrannoneustes shows that during the Middle Jurassic, metriorhynchid crocodiles were beginning to evolve into predators of large-bodied prey. By the Late Jurassic, numerous metriorhynchid species were suited to feeding on large prey, but Tyrannoneustes is the first known from the Middle Jurassic. How this impacted upon other predatory groups such as pliosaurs and ichthyosaurs is still unclear. 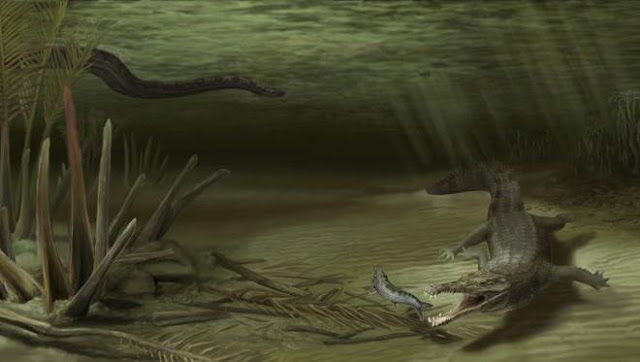 Future research can scan Tyrannoneustes bones to develop computer models of how it might have fed, Young said. He and his colleagues detailed their findings online Jan. 4 in the Journal of Systematic Palaeontology.

I have really enjoyed reading through your blog. I think you have some real quality content here along with some very informative posts and strong opinions. I think it would be worth sharing with more people and I believe I could help to get you new readers if you are interested.

I am looking for passionate writers to join our community of bloggers and I was wondering whether you would consider sharing your posts on Glipho and become a member?

It might be a good idea to give your writing and your blog more exposure while having fun and meeting fellow writers.

Please check us out at glipho.com and drop me a line at hubert@glipho.com for any questions.