Windermere is a town of about 2300 population within the Lake District National Park in the North West England shire county of Cumbria. Windermere town center is half a mile from Lake Windermere, England's largest fresh water natural lake. Lake Windermere has been summer and holidays cottage country since for the middle of the 19th century when a railway branch line gave the city-folk from central England access to the area's beauty.
The town of Windermere does not touch Lake Windermere. But it has grown together with lakeside town of Bowness-on-Windermere. The odd combined town retains two distinct town centres. The Windermere railway station continues in operation today.
While there are a many cultural attractions in the Wingemere area, none can match the beauty of the natural environment. The mountains of Cumbria surround the lake basin, at the center of which lies the ten and half mile long ribbon lake: long, narrow and deep. Ribbon lakes were 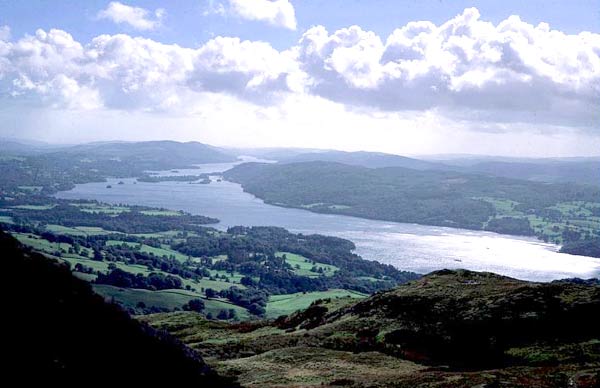 formed during the last ice age and are canyons with a river at either end. A glacier would have dug a glacial trough through a vein of soft rock, creating a canyon surrounded by the harder rock of the mountains. Boats from the piers in Bowness sail around the lake. There are 18 islands in the lake, the largest of 40 acres and privately owned. Two other villages are along the lake shoe, Ambleside and Lakeside. Sailing from one to the other is an excellent way to while away a summer's day.
Since the 1950s there have been isolated reports of somethin odd in Lake Windermere. The story, documented by Centre for Fortean Zoology, was not much known until 2006, when a man and wife reported seeing something large swimming about 30 yards from shore. This focused local attention on the Lake and later in the year a photographer named Linden Adams took some photos that were picked up by wire services and cable news network. The pictures have never been proven inauthentic.

A BIZARRE swimming incident on Windermere coincided with the announcement that a paranormal investigator will plumb the lake’s depths in search of a giant creature. Thomas Noblett, 46, was swimming the lake this week when he was suddenly swamped by a three-foot wave of unknown origin. A spate of eyewitness sightings reported by The Gazette during 2006-2007 described a 50-foot long serpent-like animal surfacing on Windermere. Psychic Dean ‘Midas’ Maynard, who came to prominence by accurately predicting sports score lines and X factor winners, will hunt for the beast in September. Mr Noblett trains on the lake for four hours every day in preparation for a channel swim. Never having had to deal with anything more than the odd passing trout, the 46-year-old said he had since reconsidered the legend of the Windemere monster. “I didn’t entertain it before. Now when I’m in the lake it has my full attention,” he said. Mr Noblett, managing director of The Langdale Chase Hotel, was swimming close to Wray Castle at 7am on Wednesday morning when the 3ft swell hit. He and swimming trainer Andrew Tighe –

paddling in a boat beside him – were the only people on the lake. “We had gotten up early and Windermere was crystal clear. The lake was totally empty apart from us and all I could hear was the slapping of my arm against the water,” explained Mr Noblett. “All of a sudden this wave just hit us. Andrew said ‘where the hell did that come from?’ and it made the boat rock from side to side,” he continued. Treading water, alone, in the centre of the lake, Mr Noblett watched as two large waves sped towards either shore. “It was like a big bow wave; a three-foot swell at least. There was two, as if a speed boat had sped past, but there were no boats on the lake,” he said. Previously an escape from the jellyfish he dodges while training at sea, Mr Noblett said the lake’s depths were not so inviting anymore. “I always look forward to swimming in Windermere, now I’m starting to get the fear. Twice I have looked down and seen fish, but only small trout. The reeds sometimes scare you, because they suddenly appear like triffids.” Dean ‘Midas’ Maynard will search the lake for the monster in September. Mr Maynard, with a background in ghost hunting, is currently searching for a sonar-equipped boat to use in the search. “It’s a fascinating subject. I’m not saying there is or isn’t something down there. Most eyewitness accounts describe some sore of eel, which if living in open water can grow very big,” said Mr Maynard. Mr Noblett is swimming across the English Channel in mid October. He hopes to raise £10,000 for Richard Rose Central Academy in Carlisle and the Cyctic Fibros is Trust.
source

From the Westmorland (Eng.) Gazette: 18 Aug. 2006
A HOLIDAYMAKER has spoken of his horror at seeing a Loch Ness-type monster’
emerge from the depths of Windermere, report Paul Duncan and Peter Otway. University lecturer Steve Burnip and his wife, Eileen, were shocked at seeing the serpent-like creature surface from the waters as they stood at a well-known viewpoint.
"I was absolutely flabbergasted, I just stood there and couldn’t believe what I was looking at," said Mr Burnip, who has been holidaying in the area for 13 years with his family.
He claimed the creature was about 15-20ft long with a little head and two small humps following in its wake. "It was like a giant eel."
Mr Burnip, who is 51 and from Hebden Bridge, was looking out from Watbarrow
point that looks across the lake to Waterhead.
Ian Winfield, a fish ecologist for the Centre for Ecology and Hydrology at Lancaster University, believes Mr Burnip could have seen a catfish, as they have been introduced to a lot of lakes for angling.
"The Wels catfish comes from mainland Europe and can grow to about 500cm and weigh up to 306kg and there have been numerous records of catfish washing up dead in Cumbrian lakes," said Mr Whitfield.

When I got wind of this story, I must admit I was absolutely thrilled to bits at the possibility that there was a cryptid yet to be found in English waters. I happened to have booked a stay in the town of Windermere itself from August 22 to 24 and was going to spend a fair chunk of time visiting the lake and nearby Coniston Water where Sir Donald Campbell died while attempting to break the world water speed record aboard Bluebird in 1967 so I had the opportunity of checking Lake Winderemere out.
People often say that if there is a cryptid in a lake why haven’t more people seen the creature and more often as well. If the body of water is anything like Lake Windermere, I can fully understand why this creature would be so rarely seen. Unlike North American lakes, access to the shore around Lake Windermere is extremely difficult. True, there are a number of piers from which you can board tour boats of the lake, but most of the shoreline – particularly at the southern end – is inaccessible.
The witness, Mr. Burnip, was very fortunate that he was in a location that afforded a good view of the lake. Watbarrow Point is the home a famous local castle so it is not surprising Mr. Burnip and his family were in this area. As the report indicates you can see Waterhead very well from this spot so the witness description of his sightlines is accurate.
Although it is certainly possible there are Wels catfish in Lake Windermere, what Mr. Burnip saw and described is nothing like a catfish. He is adamant that he saw head and two humps and this is certainly not an aspect that one could possibly expect a catfish to exhibit. Richard Freeman and the gang from the Centre for Fortean Zoology (CFZ) in Devon, also checked out the lake, as I did, after Mr. Burnip’s sighting and they hypothesized what Mr. Burnip saw might have been a large sterile eel. Now, that is a hypothesis I could live with. It is possible that Mr. Burnip saw an eel swimming on its side (this does happen and I have seen footage of it myself) which would account for the creature. It would have to be a very large eel to be 15 – 20 feet long, but it is a possibility with some merit to it.
Neither the CFZ crew or our British Columbia Scientific Cryptozoology Club (BCSCC) field work team saw anything out of the ordinary at Lake Windermere, but I am fairly excited about the prospect of revisiting the lake to ascertain whether this unknown creature is a cryptid or an extraordinarily large and unusual eel.