The Wicker Man is set on fire to pay tribute to the gods. The sacrifice of the humans inside is part of a religious ritual to increase fertility, crops, commerce, or merely to re-ignite the chances that bad times will disappear.

According to Julius Caesar in his Commentarii de Bello Gallico (Commentary on the Gallic Wars), the Wicker Man was a large wicker statue of a human used by the ancient Druids (priests of Celtic paganism) for human sacrifice by burning it in effigy. Other records talk of people being placed inside.

Despite any debunking of Caesar's accounts by modern skeptics, the imagery of the burning of the Wicker Man lives on and its use cannot be denied in modern neo-pagan rituals. Whether the Wicker Man exists in historic Pagan accounts, in modern neo-Pagan events (such as at Nevada's Burning Man), or in movies and contemporary events, the symbolism is very real and powerful.

For those interested in deciphering the unfolding of the sacrifices (including murder-suicides and costumed violence of late) during these difficult times, please pay attention to these signs, noticed already by those to whom the twilight language is being directed.

As I already have mentioned in these pages, it goes beyond coincidence to find the moniker of the Wicker turning up during incidents from the Son of Sam killings to last year's Chicago area "Phantom Clown" sightings and near-abductions of children. Keep your eyes open.


From an article published this morning, comes news of this celebration:

A 12-foot tall Wicker Man will be set on fire tonight [Friday, January 30, 2009] in a pagan winter ritual close to the Fermanagh border [Northern Ireland]. 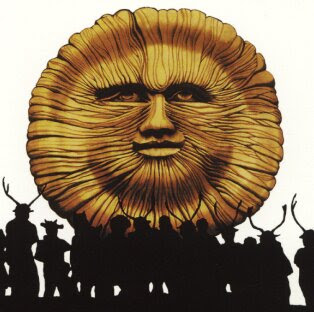 [The name Fermanagh is an Anglicization of Fhear Manach which means "Men of the Manacháin tribe," so named after their chief O'Manacháin (Anglicized as O'Monaghan), the famous warrior monk. Contae Fhear Manach or Fear Manach = "Men of Monach" in Irish.]

The folk ceremony at Aughakillymaude Mummers Centre near Derrylin will celebrate the loosening of winter’s grip and the impending return of spring as it marks February 1, known as a Quarter Day in the Celtic agricultural calendar.

At 10 pm [local time] the straw mummers hats worn all winter by the troupe performing their traditional drama will be set on fire to mark the close of the mumming season and the Wicker Man will then be lit.

The huge figure has been created by model maker Gordon Johnston from flexible sally rods — willow rods used for wicker furniture and fencing. According to Jim Ledwith of the Mummers Foundation, little is known about the origins of the Wicker Man, apart from Julius Caesar’s second hand accounts of druidic winter rituals of human sacrifice during the Gallic wars.

These alleged that female slaves and criminals were burned alive inside effigies 100 times the size of the Fermanagh one.

“While the details of the wicker man ritual may have become coloured with the telling, it represents a tradition of sacrifice by burning practiced by the continental Celts.

“Throughout Celtic Europe the wicker man legend lives on and the effigy is still burned ceremoniously as a mock sacrifice in themed ceremonies, especially at Beltaine (May) to mark the rite of spring — notably without the human sacrifice element.”

Mummers will light a gas beacon at Aughakillymaude to symbolise the sun’s return.

The 1973 movie The Wicker Man, starring Edward Woodward and Christopher Lee, is regarded as one of the finest horror films of all time, and it ends with Woodward, playing a police detective, being burned alive inside the chest of the effigy.

Don't Look Now an Anglo-Italian thriller, directed by Nicolas Roeg, was released in 1973. In the double-billing that took place back then, 1973's The Wicker Man was the "A" feature on their original UK theatrical dual release.

The figure of the "little person" in the red rain gear in Don't Look Now serves as a trigger or key. As Wikipedia notes, the "spiraling vortex of coincidences, recurring themes and motifs (light on water, breaking glass, the colour red)...reaches a dramatic conclusion in an old bell tower. John [Baxter, the lead character, played by Donald Sutherland] confronts the mysterious figure in red, realizing too late that his visions were premonitions of a grisly end."

A less well-remembered American remake of The Wicker Man, with Nicolas Cage in the lead, was released in 2006 with the film's tale being set on a private island in Puget Sound, Washington. In this 2006 version, a little girl is seen running around in a red coat. As well, there is a pair of twins, old women, both of whom are blind.

In the feature film Flatliners, Kiefer Sutherland is tormented by a small childlike figure in a red hooded coat in an homage to his father's film. The theme of the little red-clad Venetian figure is used in a dream sequence in the "Book Clubbin'" episode of television series "Absolutely Fabulous," Series 5.

Don't Look Now's drowning scene is referenced by the 2005 film The Dark starring Sean Bean and Maria Bello in which their daughter drowns wearing a bright red sweater.

In the 2005 film Hostel, a figure fleetingly glimpsed wearing a red raincoat is pursued through narrow alleyways.

The end chase scene of Don't Look Now is referenced in the 2006 release of Casino Royale where James Bond is pursuing Vesper through Venice while she is wearing a red coat.