The mysterious "Relámpago del Catatumbo" (Catatumbo lightning) is a unique natural phenomenon in the world. Located on the mouth of the Catatumbo river at Lake Maracaibo (Venezuela), the phenomenon is a cloud-to-cloud lightning that forms a voltage arc more than five kilometre high during 140 to 160 nights a year, 10 hours a night, and as many as 280 times an hour. This almost permanent storm occurs over the marshlands where the Catatumbo River feeds into Lake Maracaibo and it is considered the greatest single generator of ozone in the planet, judging from the intensity of the cloud-to-cloud discharge and great frequency.

The area sees an estimated 1,176,000 electrical discharges per year, with an intensity of up to 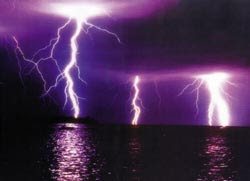 400,000 amperes, and visible up to 400 km away. This is the reason why the storm is also known as the Maracaibo Beacon as light has been used for navigation by ships for ages. The collision with the winds coming from the Andes Mountains causes the storms and associated lightning, a result of electrical discharges through ionised gases, specifically the methane created by the decomposition of organic matter in the marshes. Being lighter than air, the gas rises up to the clouds, feeding the storms. Some local environmentalists hope to put the area under the protection of UNESCO, as it is an exceptional phenomenon, the greatest source of its type for regenerating the planet's ozone layer. 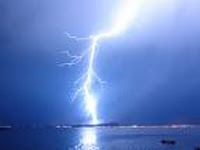