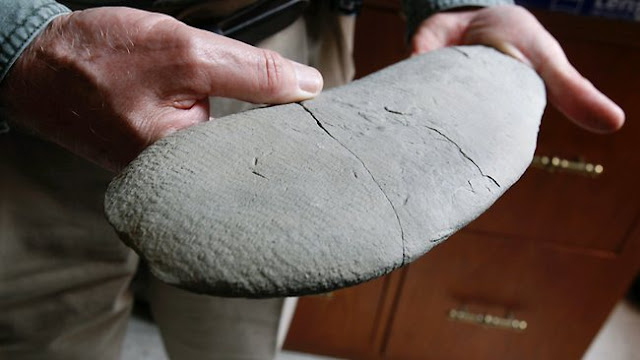 A fossilized specimen, a roughly elliptical shape with multiple lobes, totaling almost seven feet in length, was unveiled today at the North-Central Section 46th Annual Meeting of the Geological Society of America, in Dayton, Ohio.
Animal, vegetable, or mineral? Experts are trying to figure out what a fossil dubbed "Godzillus" used to be. 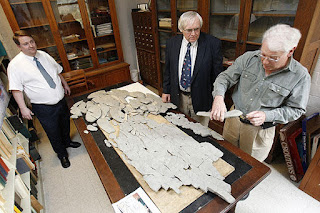 It does sort of just look like a rock-colored lump, but paleontologists affiliated with the University of Cincinnati say that they've found something very big and very weird. The 150-pound fossil recovered last year in northern Kentucky is more than 6 feet long and 3 feet wide. To the untrained eye, it looks like a bunch of rocks or a concrete blob.
Characteristics other than size also set this find apart from previous discoveries. It has an unusual texture, created by a directional pattern on its surface. It was also found with small animal fossils attached to it. These small animals, known as trilobites, may provide clues necessary for the fossil's eventual identification.

Experts are trying to determine whether it was an animal, mineral or a form of plant life from a time when the Cincinnati region was underwater.

Around 450 million years ago, shallow seas covered the Cincinnati region and harbored one very large and now very mysterious organism. Despite its size, no one has ever found a fossil of this "monster" until its discovery by an citizen paleontologist, Ron Fine of Dayton, last year. 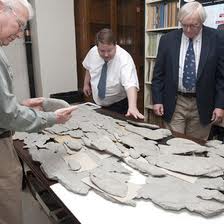 Like Godzilla, it's a primordial beast that found its way to the modern era. Now 43, he's been collecting fossils since age 4, and said he saw part of this one on a hillside off Kentucky 17 nearly a year ago.
Most fossils around here are small, the size of your thumbnail or your thumb. This thing's huge.

Ron Fine is a member of the Dry Dredgers, a 70-year-old association of amateur paleontologists based at the University of Cincinnati. "I knew right away that I had found an unusual fossil. Imagine a saguaro cactus with flattened branches and horizontal stripes in place of the usual vertical stripes. That's the best description I can give." 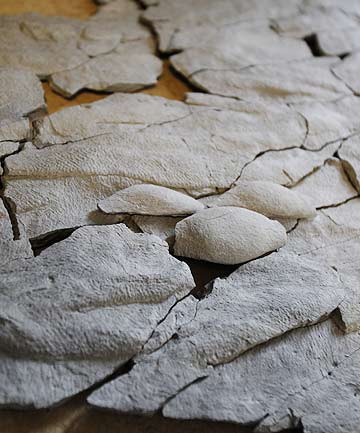